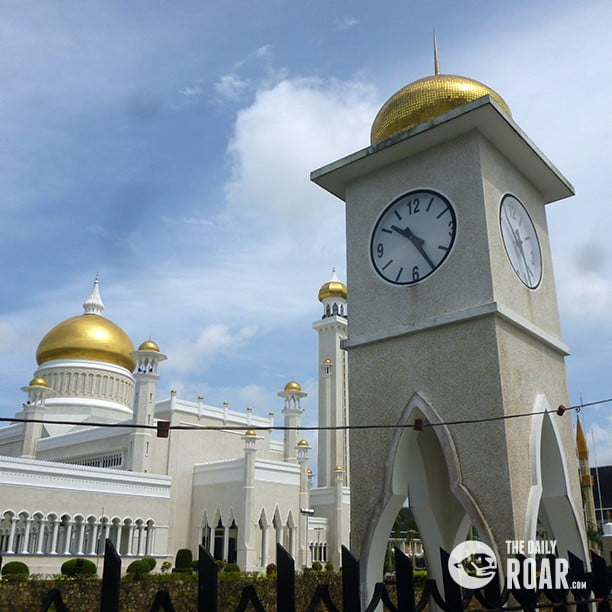 One of the most popular attractions in Brunei’s capital city of Bandar Seri Begawan, the spectacular Sultan Omar Ali Saifuddin Mosque is an Islamic place of worship in the heart of the city. A fairly new mosque, it was built in the late 1950s to commemorate Sultan Omar, a former leader of the small yet affluent Asian country. A major sight for tourists, it is also a significant religious building for the local community. It is often said to be one of the most stunning mosques in the whole of the Asia Pacific region.

Combining Malay and Mughal architectural styles and decorative designs, it is a beautiful vision of pale stone with a large golden dome on the top. Indeed, made from pure gold, the dome shimmers and sparkles enticingly in the sunshine, seen from far and wide on the Bandar Seri Begawan skyline.

Take a stroll through the delightful grounds and you will see a large sparkling reflective pool, many colourful and fragrant flowers, verdant leafy trees, a clock tower, geometric floor tiles, a well-ordered courtyard, towers that sit next to the main entrance gateway, and the soaring minaret. The minaret is the tallest structure in the whole city, and it is from here that he muezzin sounds the call to prayer for adherents. Indeed, it is highly likely that you will hear the harmonious call to prayer at least once during your time in the capital. Look closely and you will notice that the minaret combines Italian and Renaissance features. It is possible to ride an elevator to the top of the minaret to enjoy sweeping views across Bandar Seri Begawan and beyond.

Whilst the mosque is closed to visitors during prayer times (as noted on a board in front of the mosque’s main entrance), it is possible for non-Muslims to step inside the main hall to admire the grand interiors when prayers are not in progress. There is no charge to look inside, although you are restricted to a small section just inside the doorway. Visitors must wear appropriate garments to look inside, long abaya-like cloaks and head coverings for females. These are provided in various sizes. When inside you can gaze at the shining Italian marble pillars, the plush carpets brought from Saudi Arabia, and the magnificent opulent chandeliers, which came from the United Kingdom. Stained glass windows add to the visual treat. Members of staff are more than happy to provide information about the building and the Islamic faith. 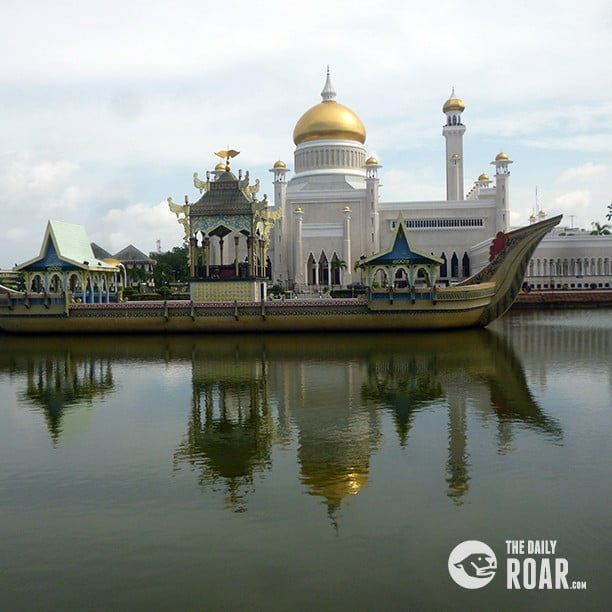 After you have admired the front and the insides, don’t forget to walk around to the side. Sitting in a man-made lagoon next to Kampong Ayer water village, the waters next to the mosque contain a striking replica of a royal boat. Whilst you can’t get up close to the boat, it is still an impressive sight on the water with the pale mosque behind it. Feast your eyes on the vessel and imagine what it must be like to be rich and powerful royalty!

If you think that Sultan Omar Ali Saifuddin Mosque is an impressive sight in the middle of the day, make sure you also pay a visit at night time. Although you cannot enter the grounds, you can walk around the perimeter fence and gaze in awe at the building when it is illuminated rather dazzlingly. Go to the side with the water and you will see the beautiful reflections from the royal barge and the mosque dancing evocatively and enchantingly on the waters. 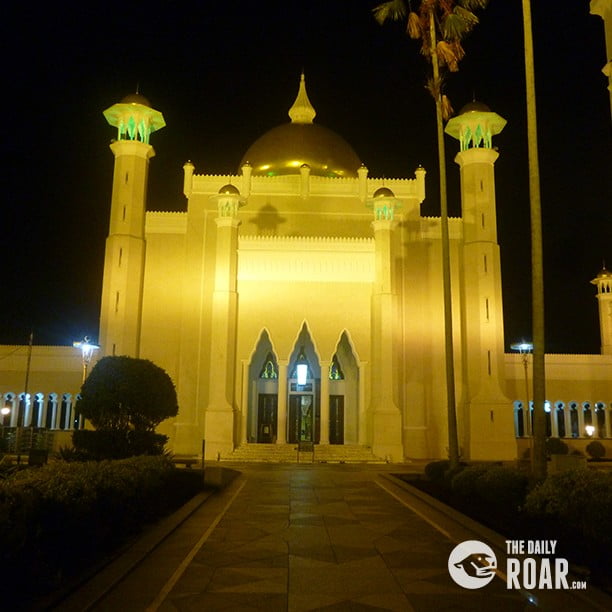 An active place of worship, visitors are reminded to dress conservatively when visiting the mosque. Car-parking is available next to the mosque, on a quiet strip that leads to the bridge to the water village. This is definitely one of those must-see highlights on a trip to Brunei.