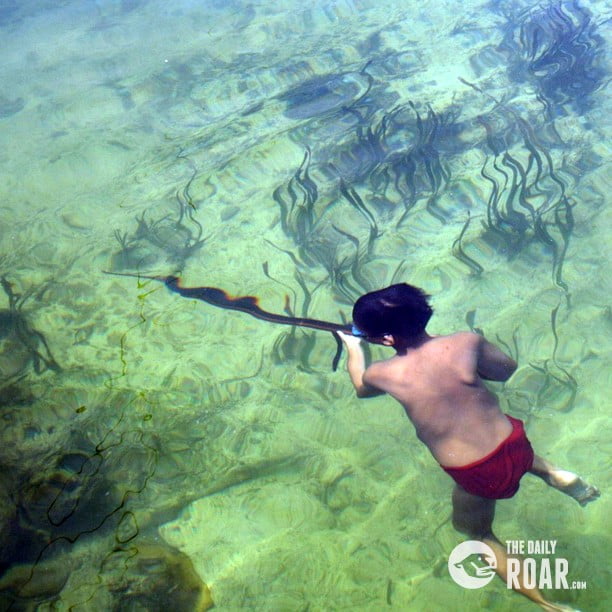 Under the blue sea, a boy was waiting for a fish in silence. He was carrying a spear made from simple materials. When the fish swam in front of him, the boy directly aimed his spear. In an instant, the fish was caught without a chance to escape. The boy came from the Bajo tribe, a community that spends their life at sea. The hunting skill of the boy is the one that makes his tribe special. Not only able to hunt with this method, the men from the Bajo tribe literally walk in the bottom of the sea to hunt for fish. This makes them worthy to be called a true sea conqueror.

Bajo people are able to dive at a depth of 15-20 meters without the use of modern scuba gear. They rely on a deep breath and simple goggle to help them see under water. When hunting, they do not use equipment that could be damaging to the environment because they are aware of the importance of the sea for their living. Bajo tribe is also true traveler who can spend months at the ocean, far from their homes. Their expertise in adapting to life in the oceans allows them to survive without the support of modern equipment and food supplies. They only need to hunt for their food needs while traveling in the blue ocean.

There are many Bajo tribe communities living in various areas in Indonesian waters. One of them is a community living in Buton, Southeast Sulawesi. Bajo people in this area call their village as Bajo Berese. This is to differentiate them with other Bajo tribes. They live in the houses they build on the water. If you come to their home, you will see that the houses are well-arranged. The people are very friendly as well. They welcome all visitors with generosity. The lives of the Bajo tribe do have a special bond with the sea. In fact, the Bajo introduce their children to the sea from an early age. They live in the sea and for the sea. Their existence is simply to preserve the sea that is often forgotten by most people.