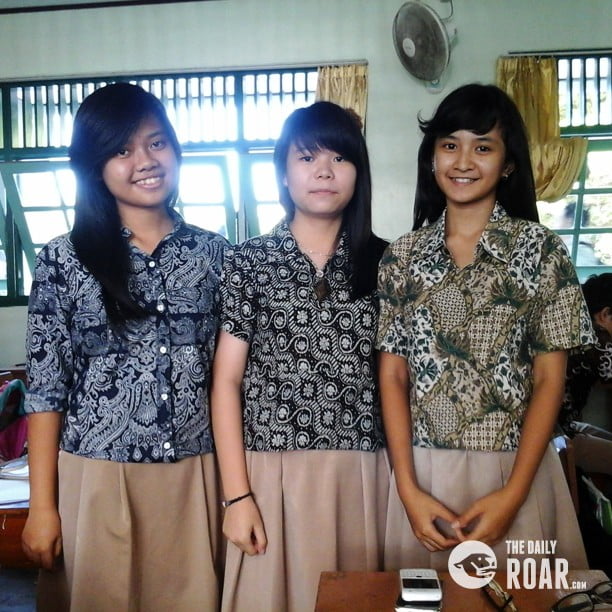 Who haven’t heard the word of batik? Batik, a cloth that is traditionally made by hand using a small dipper filled with wax, comes from Indonesia. Every kind of batik has a certain unique pattern in many colors like indigo, green, blue, yellow, white, but commonly in brown.
Batik has reached the international popularity and have been exported to all over the world. Now, not only batik used as a material to clothe the human body, but it also used as furnishing fabrics, heavy canvas wall hangings, tablecloths and household accessories.

Batik owned by almost everyone in Indonesia start from children, teenagers, adults and elders, from “the commoners” to “the upper class”. In fact, it has been known even before the day of Indonesian independence and has been an international fashion that worn by many people from all over the world. This traditional clothing is a valuable heritage from Indonesia’s ancestor.

Did you know that batik have once nearly leave Indonesia’s grip, and become another country’s culture inheritance? A certain country surprisingly insisted to claim batik as their culture and claim themselves as the founder of batik. But, thanks God that Indonesia have a strong prove to declare that batik is from Indonesia.
Realizing batik as Indonesia’s culture is threatened and endangered; the government was triggered even more to introduce batik and its origin to the world. And the result is, nowadays in Indonesia, there are many schools that set batik as one of their uniform. Moreover, batik has been approved by UNESCO as a Masterpiece of Oral and Intangible Heritage of Humanity from Indonesia.


Readers, if you are planning on visiting Indonesia, then, for sure, batik is a must buy item. The question is, is batik only for Indonesian? Absolutely, not! In fact, there have been many tourists that come to Indonesia especially to buy an originally-made-in-Indonesia batik and have proudly worn it.


Please note this. Indonesia is a friendly nation and here I am as one of Indonesia’s citizen to welcome you to visit Indonesia. For you tourists to have batik, is really a pleasure for us!
Depending on the quality of the art work, batik can be purchased with just several dollars (for poor quality and printed batik) to many thousand dollars (for the finest and handmade batik). To know the budged you will need to have batik, here is the estimated price:

P.S : The list above is the price of batik in general. It could cost higher or cheaper depends on the place. And the recommended place to buy it is in Yogyakarta and Surakarta, Indonesia.