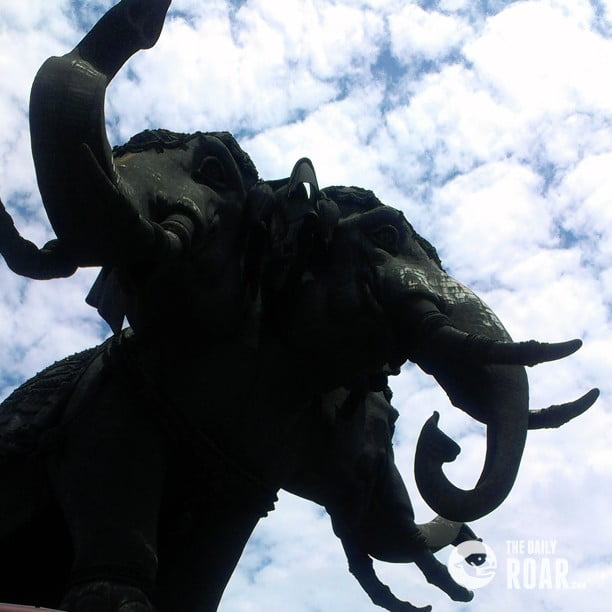 The Erawan Museum or ‘Chang Sam Sien’ in Thai is located in Samut Prakarn province in Thailand. It doesn’t take long if you take the BTS skytrain to the Bearing terminal station and then take a taxi from there is only 10-15 minutes on a good day. The Erawan Museum is known for its giant three-headed elephant structure that can be seen from far and wide. This museum is different in the way that the museum itself is INSIDE the three-headed giant structure.

Now the Erawan Museum is created in a representation of the Hindu beliefs’ Elephant of the Universe or Airavara or in another name, Erawan. The museum is built from the inspiration of a business tycoon, Lek Viriyapant. The purpose is to preserve his personal antique collections which are the very items that contribute to the Thai cultural heritage. These priceless artifacts are considered sacred for the people in the old days and believed that they bring good luck and prosperity to the land and the people on the land and therefore are not to be taken or lost to the outsiders.

Even though Lek Viriyapant, the person who dreamed up this project himself, did not live to see the completion of his work, the heirs of his family continued the wish and finally finish this structure and created a place where the Thai festivals, ceremonies and traditions can be held and also serve as the museum to keep the memory of its creator and of his life and his life’s work for the future generations to see.

There are 3 levels of inside the museum. Each level represents a ‘world’ in the Hindu-Thai Buddhist concept of Tribhumi. There are 3 worlds, the Underworld, the Human World and the Heaven.

Entering the first level, you will see four embossed tin pillars depicting religious tales portraying the four Buddhist principles that will help bring peace and enlightenment to the heart of men to help sustain the world. The staircases are embellished with pieces of crusted Bencharong ceramics. The second floor depicts the human world with exquisite design of dome-shaped architecture reflecting a blend of Eastern and Western art. The highlight is the stainglass ceiling on which a world map and zodiac are beautifully illustrated created by the German artist Jacob Schwarzkopf.

Finally you will take the narrow spiral staircase or the elevator to the Heaven which is deep inside Erawan’s belly where it houses two superb golden Buddha images with the walls and ceiling painted a representation of the eternal cosmos all done by hand.

I guess I can say that the effort made by Khun Lek Viriyapant has be very well realized and fulfilled.