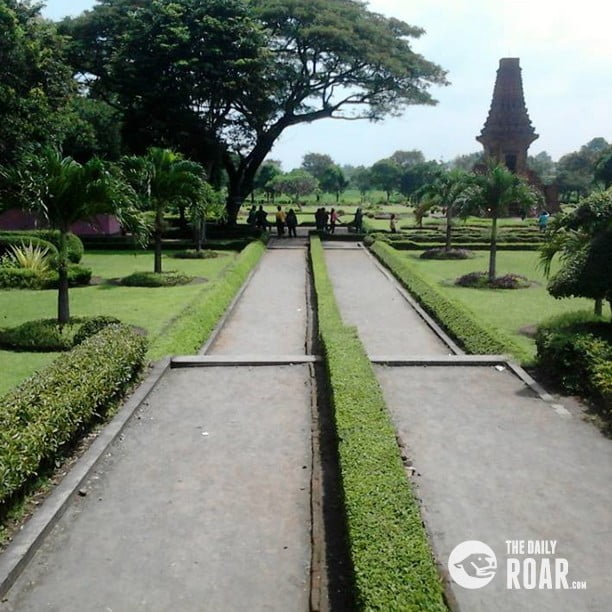 Majapahit is one of the biggest Kingdoms in Indonesia. Majapahit Era started at 1200 century until 1400 century. Raden Wijaya is the first king who builds Majapahit. After Raden Wijaya, Kertajaya, his son replaces him as a King. Kertajaya already crowed since he was a little boy. Kertajajaya had ad army leader named Gajah Mada who had a great power. Gajahmada make a famous swore called Hamukti Palapa. He swore that he will not stop his fasting until all islands in Nusantara are in the same hand, under Majapahit sovereignity. Gajah mada dream become reality when he saw the entire island united. Not only Island in Nusantara, Pahang (Malaysia) and Tumasik (Singapore) also under Majapahit sovereignity. . Only Sunda in west Java that still not under Majapahit hands. After Kertajaya replaced, this Kingdom becomes weaker. In 1400 century, Majapahit divide into 2 kingdoms. Sometimes those 2 kingdoms had a war competing each other.

Driving from Surabaya to Mojokerto for about 3 hours, we arrived in one of ancient site from Majapahit Era since 1200-1400. Located between rice field and resident house in Temon village, Trowulan Mojokerto, East Java, I saw a 506,25 m2 garden and in the middle of the garden, there’s a building that made from red bricks. I entered this place with enthusiasm. 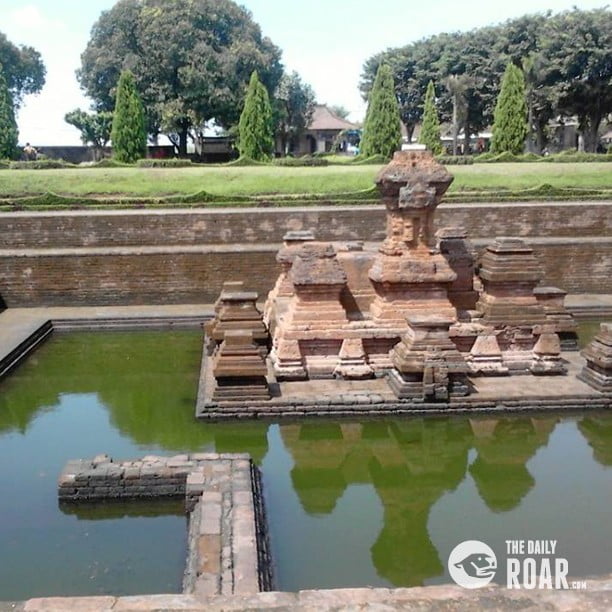 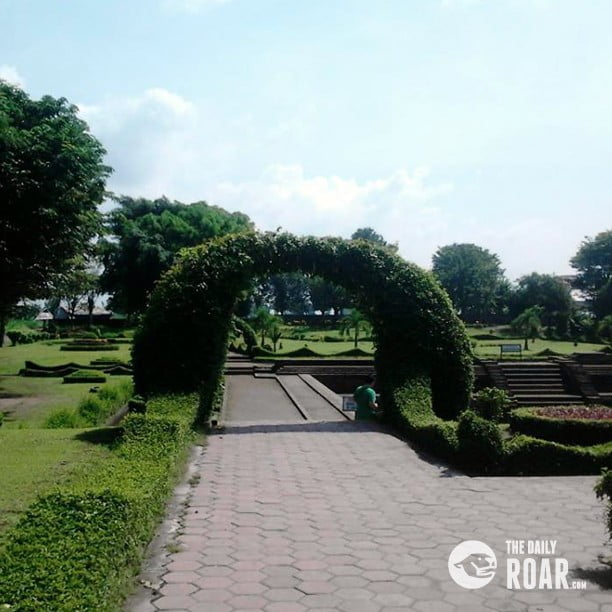 Before we arrived, Mr Wawan as our tour guide explains how the villager found this temple. In 1914, this place was a cemetery and there’s a pile in the middle of the cemetery. They didn’t realized what things buried under the pile until one day there rats plaque came in this village. They tried to find the source and saw rats came out from the pile, not just one but tens even hundred rats. They dig the pile and found a rooftop from red bricks. The residents inform Dutch goverment and they escavate the site. The temple given name Candi Tikus because they see tikus (or rats) found in this place. 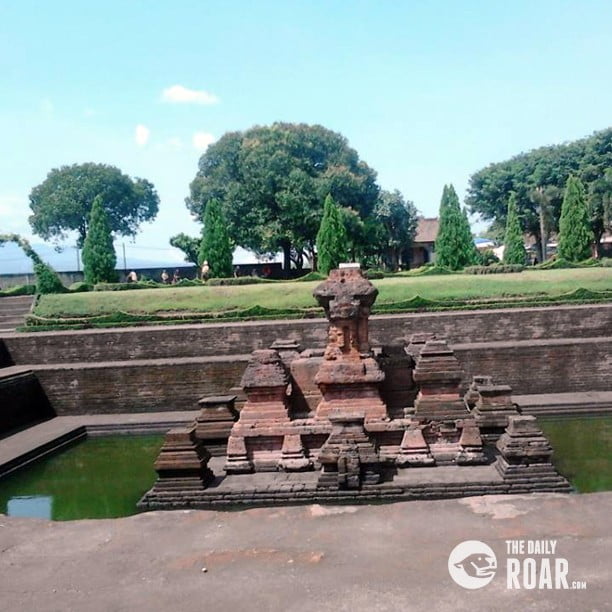 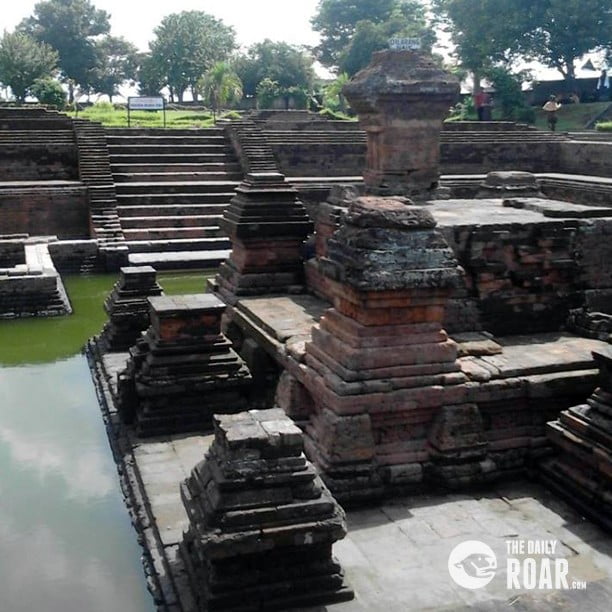 Tikus Temple has square shape with 22,5 x 22,5 m2. On the north side, we can see stair to the base of main building. Most of this temple was build using brick and it is 3,5m underground. The expert estimate this temple was builds around 13 or 14 century. Some of the expert said this place was used for princess bathing place because it has Jaladwara (a shower in various shape like lotus etc in ancient age) and other expert said this place was used as ritual/worship place for the goddess.
Since the restoration in 1984 or 1985, the government also provide mini garden and add several tress so the visitor feel comfortable. As I was astonished with this simple but meaningful place and were tried to perpetuate the beautiful scenery, I imagine the picture of some Hindu’s people do some ritual here, take water from here and praise the gods and treated the water as if it is sacred water.

While I enjoy this relaxing feeling, most of my friend take some picture, and use the temple as their best background while they pose. I also saw 30-40 elementary student having field trip and learn about this place as a witness of Indonesian greatest Kingdom. Most student write information from the teacher about this temple while some of them just running around. I saw a few youth sitting on the bench and enjoy the swirling wind. This place becomes crowded especially during weekend. Outside the area, we can see some local people selling snack or drink for the tourist. Walking 600 metres from Tikus Temple, we can see Bajang Ratu Temple.

Bajang Ratu Temple located 600 metres from Tikus Temple. Unlike Tikus Temple that has square shape, Bajang Ratu has rectangle shape. After pay the ticket, we had to walk 200 m to see the building. Unlike any other temple, Bajang Ratu is closely like a gate from red bricks.

Bajang Ratu was build during the reign of Raden Wijaya, the first king of Majapahit. Bajang ratu also have its unique story. There is two opinions behind the name of Bajang Ratu. The first one is a story about Kertajaya, Raden Wijaya son that already crowned since he was a little boy so bajang means “young age” and ratu means “queen”. The other story mentioned when Jayanegara still a young boy, he play around the gate and fell down, so he had wound. In this term, Bajang means “Wound”, and ratu means “queen” 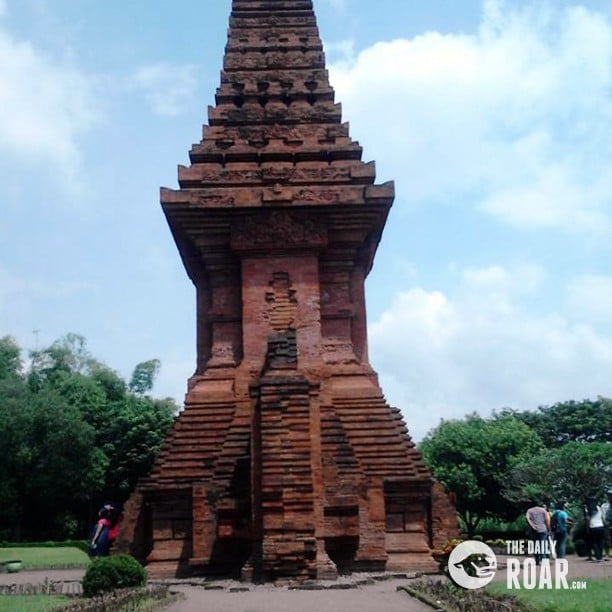 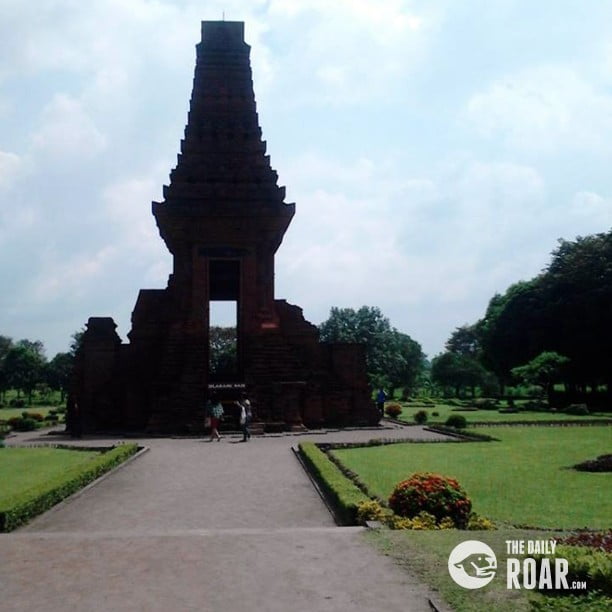 Some expert said that Bajang ratu was used for a back gate trough palace. Though the exact location of palace still not found, but the expert estimate that the palace was near from the gate. Bajang ratu Temple also used as a gate to honour the death of Jayanegara. When Jayanegara past away, Pararaton text wrote that Jayanegara sacred place is in Trowulan. His body was honour by passing the gate. The exact place for his tomb was also not found yet, but the text metioned that his sacred place was near.


Found in 1915, a year after Tikus Temple, Bajang Ratu gate only have a small restoration. Some bricks were used to replace the damage one. A local person explains the building still solid because the builder uses natural material to build. Unlike Tamansari in Jogyakarta that use albumen as adhesive or glue, Bajang ratu or any other Trowulan temple use flakes from bricks by rubbing one brick to another and adding water to create natural glue. And the fantastic thing is, the building still solid until now. 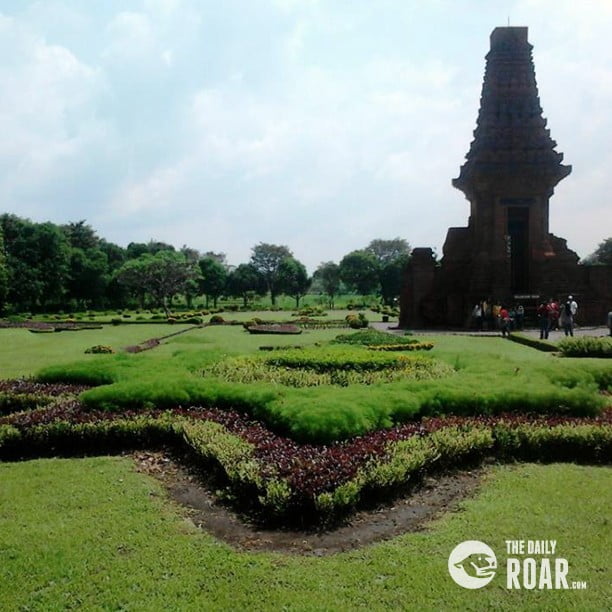 To see those building is also seing one of the greatness histories. The used of ancient technology and still solid until now, is like seing a miracle. If you are interested, you can visit Trowulan in Mojokerto east Java.