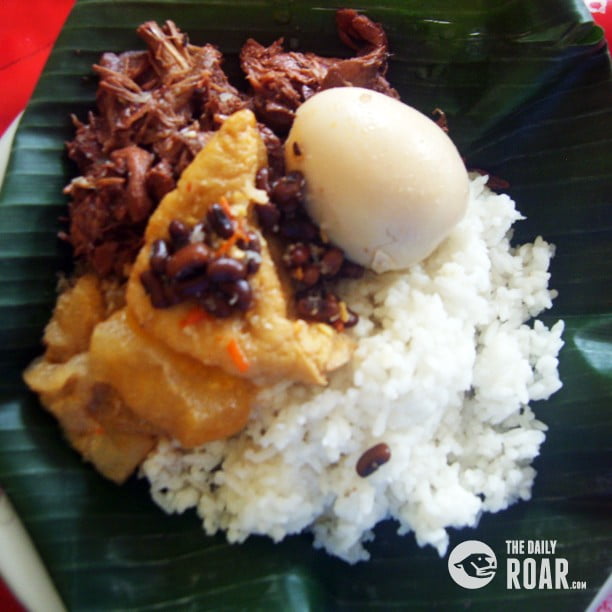 Gudeg is a traditional food from Yogyakarta, Indonesia. Many Indonesians have at least ever heard about it. Its sweet taste is something that is memorable for those who have ever tasted it. There are a lot of visitors coming into Yogyakarta and their trip is not complete if they have not tasted gudeg yet.

Ingredients and Side Dishes

Gudeg is made from a young jack fruit called gori. It is boiled on a stove of around 100 Celcius degrees for hours with palm sugar and coconut milk. Some spices, such as garlic, shallot, corriender seed, bay leaves and teak leaves are added. Gudeg is usually served with rice, boiled egg, tofu or tempe and a stew made of crisp beef skin (sambal goreng kerecek). It tastes sweet and a little spicy as sambal goreng kerecek contains chilli in it and a glass of hot tea can be a perfect drink when you are eating a portion of gudeg.

Young jack fruit or gori is the main ingredient of gudeg because in the past, it could be found easily in the people’s garden in Yogyakarta. Formerly, the Yogyakartans were only familiar with one kind of gudeg, wet gudeg. Another kind of gudeg, dry gudeg, was introduced about 50 years ago when people visiting Yogyakarta started to bring it as a gift. It can be brought as a gift for people back home by packing it in besek (a basket made of plaited bamboo) or kendil (a jar made of burnt clay). From then on, gudeg has been growing as a home industry in Yogyakarta.

There are rows of gudeg outlets on the south of Plengkung Tarunasura and they all have a long history. Ibu Slamet was the first person to start selling gudeg in 1942. A few years later, two other gudeg outlets were open. They are Warung Gudeg Campur Sari and Warung Gudeg Ibu Djuwariah, the latter known until now as Gudeg Yu Djum. The three famous outlets had stood out for about 40 years. Unfortunately, in 1980’s, Warung Campur Sari was closed. Thirteen years later, another outlet named Warung Gudeg Ibu Lies was open. Another famous gudeg outlet is Gudeg Permata. It is called Gudeg Permata because it is located not far from Permata Movie Theater. Many of its customers are prominent public figures like Sri Sultan Hamengkubuwono X, the Mayor of Yogyakarta and some celebrities. At present, there are over ten gudeg outlets along Jalan Wijilan, Yogyakarta.