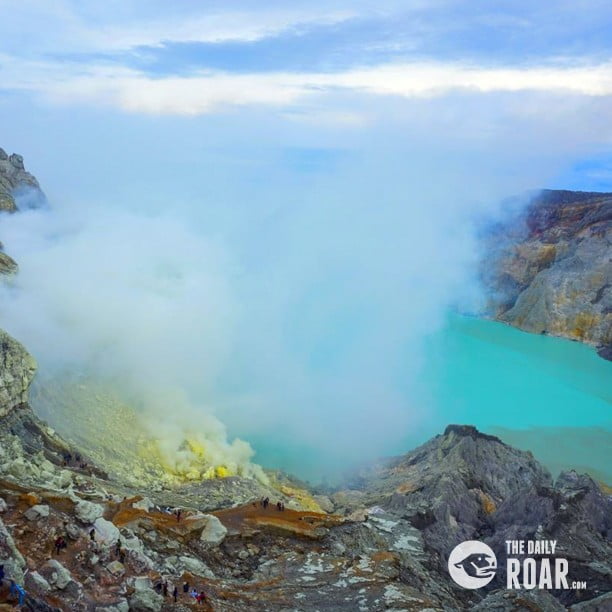 One of the most beautiful mountains, Mountain Ijen

Mountain Ijen (Mt. Ijen) is one of the most beautiful mountains in Indonesia. It is located in Banyuwangi, East Java, Indonesia. Mt. Ijen is famous with its Blue Fire phenomenon which is only happens in two places in the world. They are Mt. Ijen, Indonesia and Iceland. Last month, I went to visit Mt. Ijen with my friends. We went there by car and arrived in Paltuding around 11 p.m. Paltuding is the entrance gate to climb the Mt. Ijen.

The ticket box opened at 1 a.m so we took a rest for a while before the climbing. After we got some rest and recharged our energy, we started to prepare our self. First, we queued in the ticket box and then looking for the tour guide. My friend, who ever visited Mountain Ijen, said that the track to the crater was dangerous so it was better if we went there with a tour guide. We asked the people in the information center and they helped us to find the tour guide. It cost IDR 150.000.

On track at Mountain Ijen

Talking about the track, Mt. Ijen has smooth track but terrible slopes and you could smell the sulfur dioxide along the way. That’s why you should use a mask. If you forget to bring a mask, you can rent it from your tour guide or buy it from some sellers in Paltuding. You can rent a gas mask from the tour guide. Meanwhile, the sellers sell the ordinary mask that you normally encountered in the hospital. I used the ordinary one and made it wet by added some water to my mask to reduce the smell of sulfur dioxide and it works!

We hiked for two hours to reach the peak of Mt. Ijen and then walk down 800 meters to the crater to see the Blue Fire closer. Along the way to the crater, we met some miners. They were local people who work as sulfur miners and carrying around 70-80 kg sulfur every day. My tour guide said that now some of miners changed their job and decided to be a porter or a tour guide. They thought it’s safer than became a miner. It is true that work as miners is high-risk, especially for the health risk. I saw most of them weren’t using proper safety equipment. They didn’t wear mask, gloves, and jacket. Maybe they were already familiar with the cold, but I think wearing a mask is a must. The sulfur dioxide isn’t good for your health.

You can only see the Blue Fire before the sunrise. That’s why many people started to climb before dawn. The beauty of Mountain Ijen isn’t only about the Blue Fire, but also about the crater. When the sun was rising, I saw a breathtaking view of the turquoise lake and beautiful crater wall around me. Ijen crater has the largest acidic lake in the world. So, in this mountain you could see two amazing natural phenomenon. The first is the Blue Fire that only happens in two places in the world and the second is the largest acidic lake in the world. Furthermore, you need to know that the sulfur dioxide will be even smelly, when you get closer to the crater and when the wind blows the sulfur dioxide towards you. So, prepare your mask well!