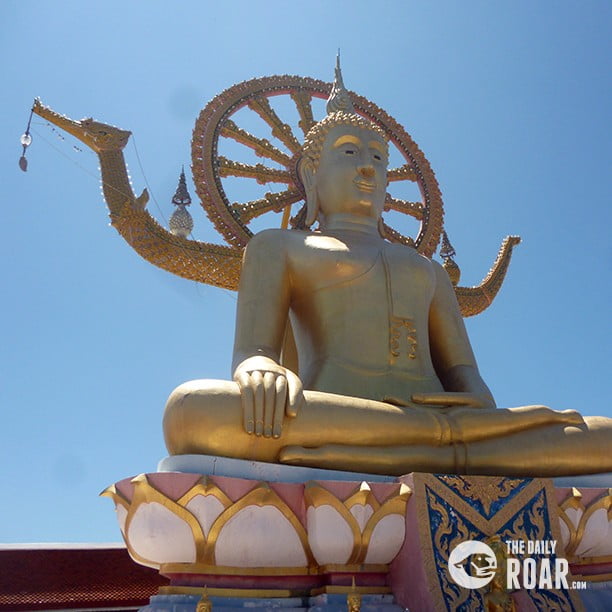 One of Thailand’s most popular islands, Koh Samui is part of Surat Thani Province and lies in the Gulf of Thailand. Easy to reach, it has a small airport as well as regular ferry services to and from the mainland. Many visitors enjoy long days basking in the sunshine on beautiful sandy beaches, and there are also plenty of opportunities to explore the verdant forests of the island’s interior.

One of the top things to see when on Koh Samui is the famous Big Buddha. Sitting proudly on top of a hill, it is on a small island next to Koh Samui, Koh Faan. No need to worry about needing to catch a boat (or swimming!) to the other island though; both islands are connected by a short causeway. Indeed, you probably won’t even feel as though you have left the island of Koh Samui!

Although you cannot help but notice the large and impressive golden Buddha statue, which stands at 12 metres tall, try to resist making a beeline up the steps immediately, and instead take some time to explore the temple complex of Wat Phra Yai first. There are several Buddhist statues throughout the grounds, as well as a number of vendors selling spiritual items, such as amulets and garlands, snacks, drinks, clothes, and souvenirs. The entrance to the complex has tall statues of giants, known as yaksha. The yaksha are said to protect the area and chase away malevolent spirits.

Then, ascend the steps to the Big Buddha! As you climb, you’ll see that the stairs have the multi-headed serpents, known as nagas, slithering down the rails. When you reach the top not only will you get to enjoy the impressive statue from close quarters, but you can also admire the views out over the ocean. Pay attention to the details around the base of the statue and the Thai inscriptions.

Built in 1972, the statue shows the Lord Buddha in what is known as the Mara position. He is in a state of purity and stillness, with the left hand resting in the lap, and the other hand reaching down towards the floor. You may spot that the statue features several different elements; it incorporates aspects from Buddhism, Brahmanism, and Animism.

A short walk from the main temple area, located next to the water, are some statues from an old Thai poem. The poet was a royal poet. You can see one of the main characters mounted on horseback, as well as several interesting others. 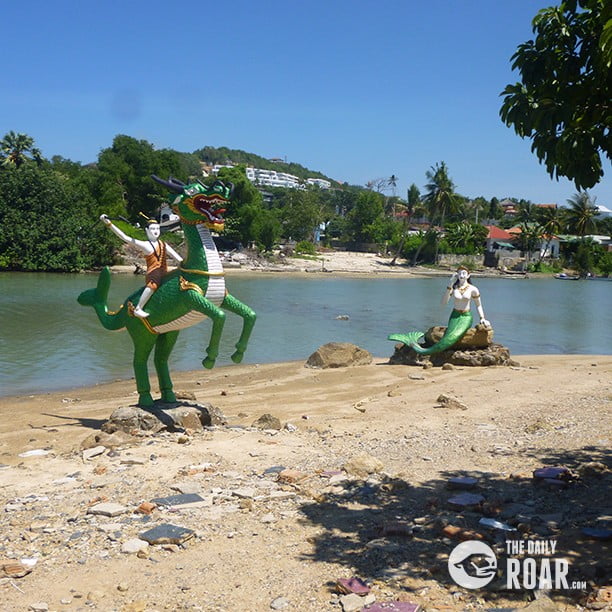 Other great things to see and do on Koh Samui include taking a boat trip to explore nearby islands, wandering through the traditional fishing village at Bophut, enjoying the beauty of glistening waterfalls such as Na Muang, Na Muang Two, and Hin Lad, seeing the mummified remains of a monk at Wat Khunaram, playing a round of golf, and visiting one of the attraction parks.

For some relaxation, how about indulging in luxurious massages and other treatments at one of the island’s top-class spas? Or perhaps joining a yoga or meditation session? Foodies can enjoy tasty food from high-class restaurants and street-side vendors, or you may want to learn how to replicate the delicious fiery tastes of Thai cuisine with a cooking lesson or two. And, when the sun goes down, Koh Samui offers so much for night owls, from dancing the night away in a club, kicking back in a chilled-out beach bar, watching an exhilarating Muay Thai fight, or being entertained at a cabaret show.