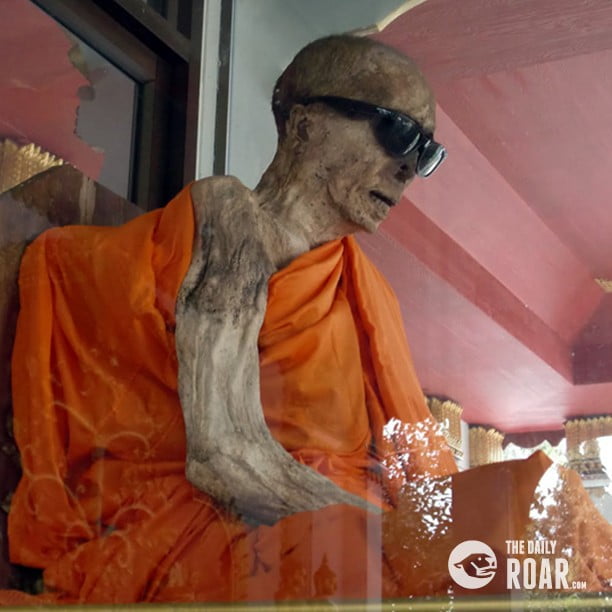 Koh Samui is a large island off the coast of southern Thailand. Part of Surat Thani, it is connected to the mainland by regular ferry services. The island also has a small international airport, though most services arrive from other parts of the country. Famous for its pretty beaches, lush golf courses, and luxury spas, there are also several cultural attractions on the island to give you a taste of Thai life. One such attraction is the temple of Wat Khunaram in the southern part of the island.

At Khunaram is a fairly typical working Thai temple, complete with sparkling roofs atop ornate buildings, numerous statues of the Lord Buddha in a variety of postures, plants and flowers, religious items, and monks wandering through the grounds wearing the famous saffron robes.

As an active temple, visitors are reminded to dress modestly, with shoulders and knees covered, to remove shoes to enter the halls, and to act with decorum.

Although Wat Khunaram may not be the most impressive temple in the country, it is a great place to see how Thais pray and worship, with many locals coming here to make merit and leave offerings. There are places to hand where you can buy flower garlands, candles, and incense if you wish to also leave an offering, and you will also find an assortment of Buddhist amulets. Admission to the temple is free, though donations are welcome. A major reason to visit the temple, however, is because of one particular unusual feature …

Remains of a Mummified Monk

Wat Khunaram is home to the mummified remains of a revered monk, Louang Pordaeng. Contained within a glass box, the corpse looks quite life-like, albeit quite dry with a slight waxy appearance.

Born on the island in the 1890s, Louang Pordaeng spent a short period as a monk before getting married and going on to have a family. When his children were older he decided to return to the monkhood, spending time in Bangkok learning meditation skills and Buddhist teachings. Known for being excellent at meditating and for being able to teach others how to effectively meditate, Louang Poedaeng eventually became the head monk of Wat Khunaram.

It is said that the monk predicted his forthcoming death when he was 79 years old. He is said to have told people that, should his body decay, he wanted to be cremated, as is customary in Thailand, but if his body did not start to decay that he wanted to be displayed within the temple. He wished to inspire other people to follow in his footsteps on the road to Buddhist enlightenment. 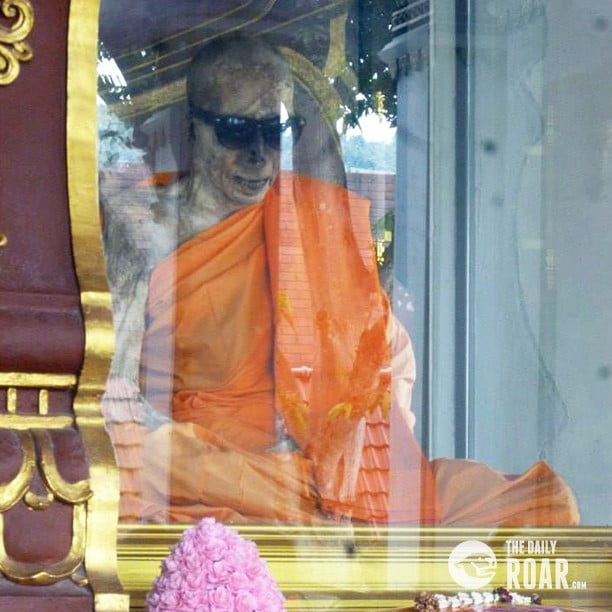 The monk died shortly afterward whilst meditating. His body did not decay, and so was therefore put in a glass display box. Sitting down and wearing the traditional monk’s robes, the only extra addition is a pair of sunglasses to hide the withered and dried eyeballs.

Seeing the monk’s remains is certainly a rather unusual sight when on the island of Koh Samui!