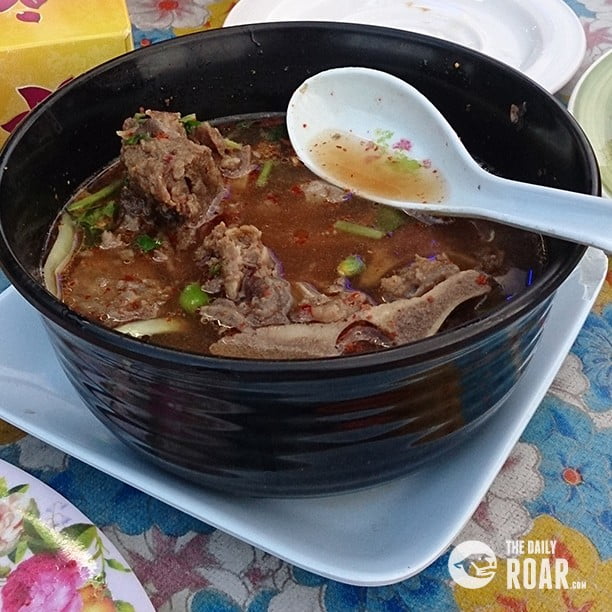 Sup Tulang or ‘bone soup’ in English is a soup that consists not entirely of bones. It is one kind of food that is differently interpreted by each person. There are many varieties of the bone soup which you can find in the market and each soup has a taste suitable for different persons.

In Paka, Terengganu, the land of oil and gas in Malaysia, we have all type of persons working there and we could say that every variety of bone soup is here. The most popular variety is the one cooked by the Kelantan slang speaking people. Guess what, they are not from Kelantan but they are indeed from southern Thailand. They speak in Kelantan Slang because they learned Malay by experience and the fact that they are well mixed with the people from Kelantan. In fact nearly all tomyam and ala-thai restaurant’s cooks are from southern Thailand and they are usually male cooks too. They are good, yes from scale 1 to 10 their point is 9.5.

The one in the picture is the ala thai bone soup. It is perfect and has a bit of sour flavor together with a bit of salty flavor and of course you could peel off the floating chillies in the bowl or mix it with the soup.The taste will just be marvelous. I always love to add some sambal belacan in the soup to add the flavor which is much the same as putting the MSG also known as Ajinomoto. In fact belacan, was used by our ancestors to add flavor to their cooking before MSG was invented.

The dish is not complete without its wonderful mate, the telur dadar , or mixed fried egg. The egg is stirred together with some onion and a pinch of salt and then fried. Bone soup, white rice and telur dadar would be my complete meal , it makes me full until the next morning.

The higher level of bone soup is gearbox soup made from the T-Bone of the cow, you will rarely find some meat on the bone. You will be given a knife and a straw to suck out the bone liquid. Slurrpp and you will be full like eating for 2 days. Ahh, I wonder where to find the soup here in this late hour. Thinking about this really makes me hungry.

What are you waiting for? Pack up and go order some bone soup.. Nyum nyum