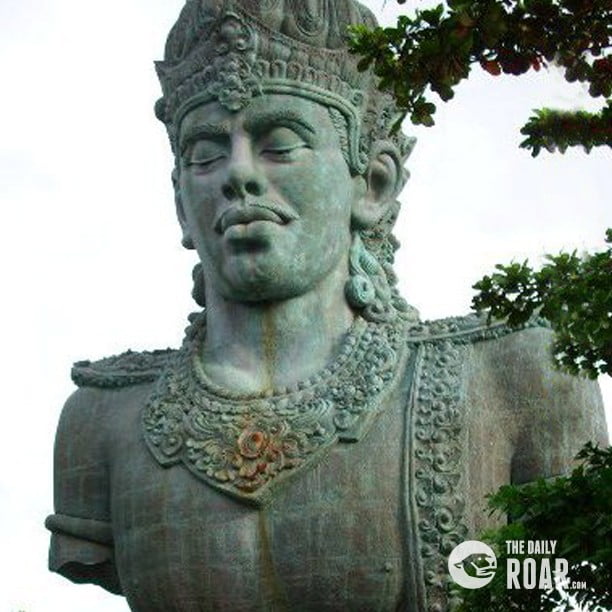 Garuda Wisnu Kencana culture park which is usually abbreviated as GWK is a recreation park located at southern part of Bali island, at Tanjung Nusa Dua, Badung Regency, Denpasar Bali. This place, in the future, will be a monumental place where a giant statue will be placed. This statue is a huge monument of Wisnu riding Garuda, his mounts. Once completed, this statue will be higher than Liberty statue in United States with at least 75 m in height. This statue is a masterpiece from Indonesia artists, I Nyoman Nuarta.

Until now, there are only 2 completed parts of this statue which people can see at this park: torso part of Wishnu and head of Garuda. Temporarily, the artist decided to place this statue at Tirta Agung area.

This statue is a physical form of Hindu mythology in Mahabharata book. It was told that Garuda hatched from egg given by a Brahman priest, whose mother kept as prison by his own aunt. After being born to this world, Garuda decided to free his mother by bringing Amerta water as requirements asked by his aunt and her 1000 snakes. However, using some tricks, Garuda finally could free his mother without handing the water to them. In their way back to home, Garuda met with Wishnu who asked him to give the water back to gods. In replacement, he asked Garuda to become his riding.

Sculpting this local myth is a great pride for this artist. Instead, this statue will also become his present from Bali to the world. This project was started a couple years ago, but still it can’t be completed at that time. It was told that the artist need at least 4,000 tons of copper in order to complete the statue. Maybe this is the main reason because getting 4,000 tons of copper is not an easy task to do, especially because of money he should spent when the market price of copper is getting higher today. Another problem is always bureaucracy, even though in the future this statue can be a symbol from Bali.
Beside of this statue and its parts, visiting Garuda Wisnu Kencana cultural park is everyone should not miss when visiting Bali. After enjoying the greatness of this statue, people can continue to enjoy beautiful natural scenery at this area.

Beside visiting this park to enjoy the statue and natural scenery, this park has also attracted people to hold various events, such as art performance, exhibitions, conferences, or even just spiritual visit hold by some religious groups. Even though your religion or belief is not Hindu, visiting Garuda Wisnu Kencana cultural park is not a bad thing to do. Everyone can learn cultural diversity and how to respect others, instead of making issues and social clash. With 6 recognized religions in Indonesia and many unrecognized out there, another interesting thing people want to see from Indonesia is how its people deal with diversity without making it an issue.