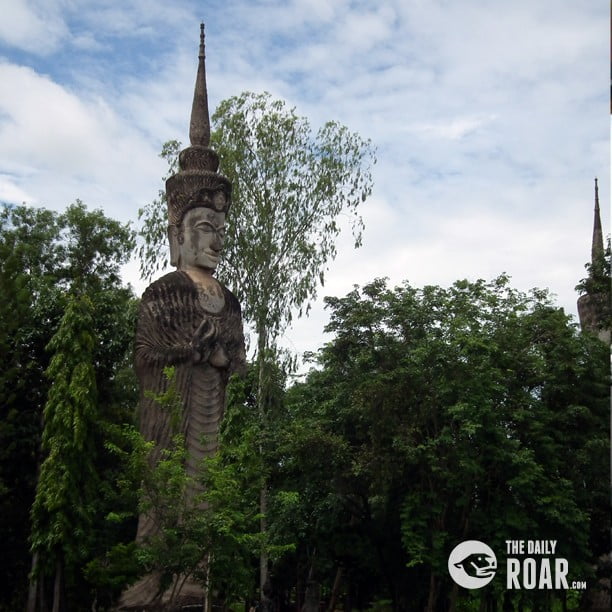 Starting from the Mo Chit Bus Station in Bangkok, we boarded the bus and sat right at the very back. The VIP buses are awesome, the seats are very wide and there are plenty of leg rooms. Then as the sun rises on the horizon, we finally arrived at the Nong Khai Bus Terminal in Amphur Mueang. The province is very quiet even in town. We were right at the border town between Thailand and Laos. The Thai-Laos Friendship Bridge was just a short ride away.

One of the gems here that you should not miss is the Sala Kaew Ku sculpture park. It’s only a short ride away from the city. The entrance fee for children is 10 baht per child and 20 baht per adult and it’s the same price for everyone.


Sala Kaew Ku was built by Luang Pu Bunluea Sulilat who first started the same project across the river on the Laos side. However, in the year 1975, the communist revolution in Laos gotten worse, he fled across the Mekong River into Thailand and built the park again in the province of Nong Khai in the year 1978. The park is created in a mixture between Hinduism and Buddhism. The sculptures are made from concrete however, from the humidity and the weather in Thailand, the water stains and moss growing on the sculptures is making them look a lot older than they really are. I’m sure they’ll look ancient in a few more decades from now.

In my opinion, the center piece of the park is a set of sculptures depicting the beliefs about the Karmic cycle of life and the Destiny. First you have to walk through the ‘Gate of Time’ which you will be walking through a gaping mouth, literally. In front of the mouth lies a set of sculptures depicting the Destiny cycle of life. Once you entered, you will find ‘The Womb’ sculpture which supposed to represent the birth into the world of the flesh and blood. Then the area widen into a circle filled with a large 4 faces and 4 outstretching arms in the middle. This represents the different phases of life. There are sculptures representing the Karmic Cycle at one end and the other end, the sculptures depicting old age and death in which no one can escape.

Other sculptures depict the literatures and lore of Buddha, Naga the snake gods and goddess and the stories from Ramayana.