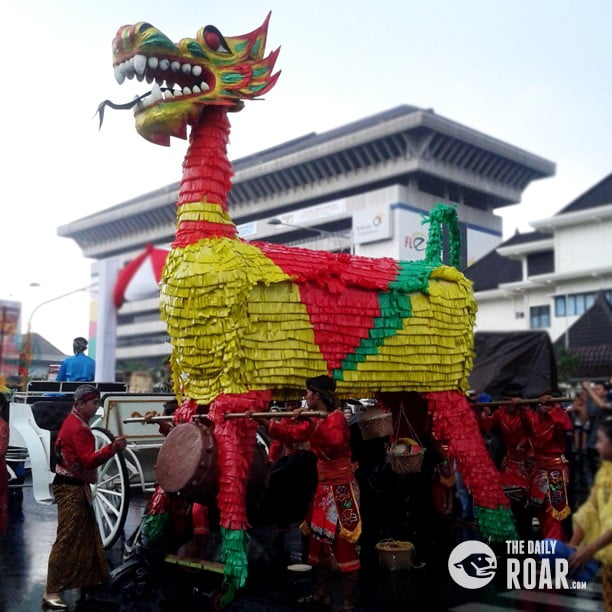 For those people who live in Semarang City most of them are familiar with a thing that is called ‘Warak Ngendhog’ Probably there are only a few who do not know about this. ‘Warak Ngendhog’ is a kind of popular toy in the shape of a mythical rhinoceros-like creature carrying eggs on its back. It usually appears once a year before the fasting month for Moslems begins. ‘Warak Ngendhog’ can be found in the ‘Dugderan’ Festival. ‘Dugderan’ Festival is a tradition festival held once a year one week before Moslems’ fasting month called Ramadhan.

Although some people say that Warak Ngendhog looks like a rhinoceros, it is actually not. Warak Ngendhog is a combination of some animals. Physically, it is four-legged creature with a long neck, colourful feathers (red, white, yellow, and green), straight body angle and head, and carrying an egg under its tail or between its legs. It is believed that the shape of this creature has a deep meaningful philosophy to the life of the Semarang citizen. Its’ shape represents different ethnic groups that live in Semarang. They are: Javanese, Chinese, and Arabian. The physical appearance of this creature is said to resemble a goat, a horse, a buffalo, a chinese dragon or even a dog. The head resembles a dragon (Chinese), its body resembles buraq (Arab), and the legs resemble goat’s legs (Javanese).
The word ‘Warak’ comes from the Arabian word “Wara’i” which means holly. And ‘Ngendhog’ (or lay egg) is symbolized as a merit received by someone after doing a holly process. Literally, Warak Ngendhog means that whoever keeps the hollyness will get merit or rewarded at the end of the month on the day of Lebaran.

Warak Ngendhog has been an icon for Semarang and has been known in other cities also. The local government even plans to build a statue of it as the mascot of Semarang City.