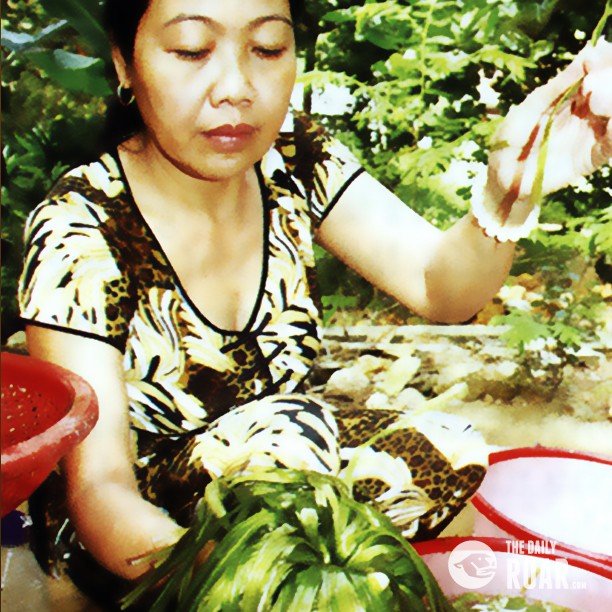 After the flood season in 2010, in a relief trip in a sunken region in Hai Lang (Quang Tri), I was taken by local persons to try a very special kind of vegetables named ‘xôộc xoạc’.

Mr. Xoang related that only inhabitants in Hai Thuong Commune, Hai Chanh, Hai Hoa know about this vegetable and know how to eat it. ‘Xôộc xoạc’ is very tasty, it is abundant from August to November according to the lunar calendar, especially right after the flood season was over. Such greens are also known as “rau toong” or “rau bưng”. Apart from the name ‘toong’…other names have popular explanations which are rather interesting: ‘when you chew this vegetable, you probably hear a very funny sound like ‘xooc xoac”. Another story said that a long time ago any woman who went to pick vegetables had to take off their clothes in order to be able to dive under the water. Unfortunately there was a crowd of men passing by at that time, feeling confused, the woman brought up a bunch of vegetables to cover some sensitive parts of her body, the name ‘rau bưng’ took shape since then. (‘bưng’ means carrying/bringing)

During a few times coming back to this countryside, I always asked to eat ‘xôộc xoạc’ but only received shakes of the head as this vegetable had become too rare to find. Luckily, in a day at the end of October 2012, Mr. Luc, a cultural cadre of Ha Lo Hamlet ( Hai Tan Commune) called us, he said, ‘I found the vegetables, come here now!’ When I asked him to buy them for me and I would pay him back as soon as he got here, he shrieked with laughter ‘Just ten thousands dong and you can eat them to death’

Mr. Luc’s wife had passed away for almost ten years, therefore, our cook that lunch was Miss. Le Thi Le (his sister-in-law). A process to prepare this odd vegetable was quite sophisticated: Ms. Le held small bunches of ‘xôộc xoạc’, cut off their roots and soaked in salt-water for a while before slicing them into pieces of 5 centimeters. Then she rubbed and twisted them together, ‘This vegetable’s leaves are as thin as rice’s ones and about three-span long, they grow down the stream with lots of mud so we have to clean them carefully before eating.’

It’s not easy to eat ‘xôộc xoạc’ rawly, besides mixing with soya sprouts, dills, banana flowers, the actual key is the sauce. Ms. Le minced lean and fat meat then mixed them with special spices. Finally she poured shrimp paste to that mixture. A tasty smell spread out from the boiling skillet, Ms.Le smiled and said, ‘Eating xôộc xoạc with shrimp paste mixed with lean and fat meat is the most delicious, or it can also be used together with sourly cooked fresh water fish. Our forefathers formerly only ate such vegetables with taro plants.” Once ‘xôộc xoạc are served, just eating them with white rice is delicious enough. The soft vegetables, the greasy meat and the sufficient shrimp, they are all blended together…..xooc xoac…xooc xoac…in a twinkling of the eye, a big plate of vegetables is now empty.

Gio An area (Quang Tri) is also famous with watercress (‘cải xoong’ or ‘rau liệt’). It grows in midland or on hills and mountains like Cam Lo, Dakrong and makes many many eaters infatuated. Cua Tung Coastal has the seaweed (rau mứt) used to cook together with rice gruel (cháo vạc giường). To change appetite, inhabitants mixed all kind of wild vegetables in their garden such as purslain, amaranth, basella alba, pennywort, mustard greens, plantain…etc…to make a pot of combined soup.