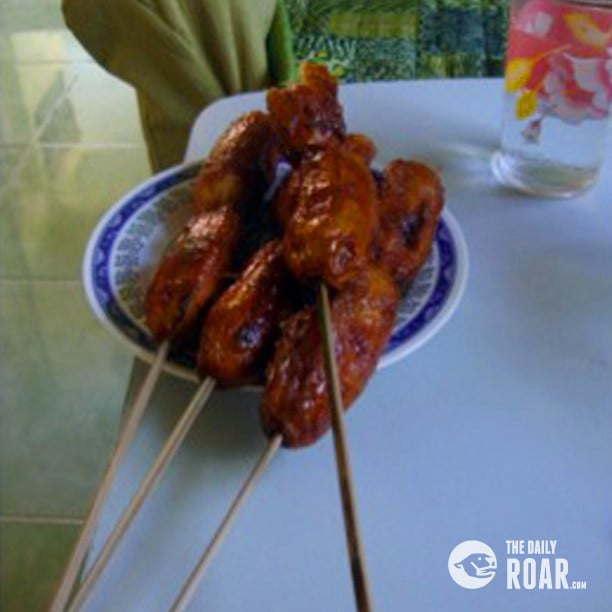 One the different varieties of bananas, the “Saba” banana originated from the Philippines. The “Saba” banana though can be eaten raw, Filipinos considered it to be a cooking banana like plantains. It is considered being one the most important varieties of banana in the Philippines. Saba bananas are robust and large with a white and starchy meat that makes it ideal for cooking and extensively used in Philippine cuisine. However, the most famous way to cook the Saba bananas among Filipinos is by deep-frying them and adding brown sugar at the end of cooking and it is called Banana-Q.

From the name itself, it has a similar concept of barbecue or kebab wherein the meat is put together in a skewer. Since Philippines is a tropical country and with the Filipinos’ ingenuity, the Filipino version of a skewer is made of bamboo. It is relatively one of the favorite afternoon snacks all over the country. In every town, small villages or even in the city you will find a small store that cooks and sells Banana-Q. Because it is deep-fried, therefore, Banana-Q is served hot and with the brown sugar it gives an extra sweet flavor to it with a gooey texture. There could be a slight difference in preparing Banana-Q in different province; some can have more sweetener to it like coconut custard or “matamis na bao” in Tagalog, a different technique or presentation of Banana-Q. Still, at the end the idea will be the same Saba bananas on stick. Commonly accompanied by a glass of water on the side, but the current generation prefers to have soda instead to enjoy these fried bananas on stick. With the simplicity of the ingredients in this snack, it is needless to say that the price of Banana-Q is pretty affordable to every Filipinos.

Though almost everything comes in an instant today and regardless of the influences of the Western culture when it comes to food, Banana-Q remained to be an unbeatable snack of all time in the Philippines. It still belongs to the top choices of every Filipinos when it comes to snacks. Banana-Q also proved that in a busy world, it doesn’t mean that everything should be fast especially with food. A simple snack prepared with passion and Filipino tradition. That’s why it is not just a simple banana…it is Banana-Q.

/// Written by Imelda Yumul, The Philippines