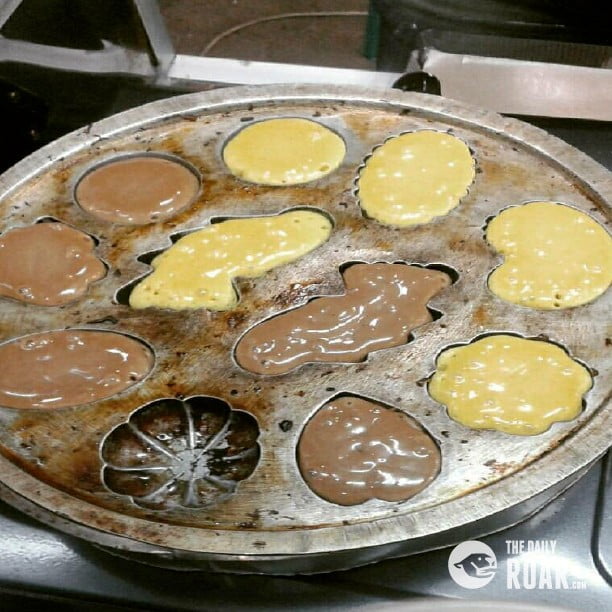 Kue Cubit (Literal Translation: Pinch Cake) is a popular traditional snacks for Jakartans. The original type was small (4cm round), mix with flour and milk. It is topped by chocolate rice milk (“meises”). it is often sold in food carts (alongside the Spiderweb Cake or “Kue Jala / Laba-Laba”) near schools or traditional markets.

The clamps that is used to take the baked cakes from its steel mould looks like it’s pinching them, hence the name “Kue Cubit”. Other source also stated that because of their small size, people should eat it with pinching it.

The price is also very cheap. You can order them baked or half-baked (Most people prefer this, by the way). No wonder that everyone loves it so much!

Nowadays, Kue Cubit carts are not as easy to be found like before. All of sudden, Kue Cubit has become a “trend” foods for millenial era. They are upgraded from street food carts to delicacy that no longer that cheap. It can be found inside a mall, cafes, and hip restaurants all across Indonesia – not only in Jakarta. A lot of recipes for Kue Cubit can be found online, for you who want to join the trend and reminisce the childhood delicacies. The flavor is many, ranged from the original one (flour and milk), marshmallow, bubble gum, macha green tea, red velvet, topped with Toblerone / Ovomaltine, rainbow, or even the savoury one with Ham and Cheese.

If you’re lucky, you can still find the original Kue Cubit carts roaming around in Jakarta (but somehow off course, currently with different price range) and also they expand to the trend with green tea or red velvet flavor. I once found the cart in Kemang area, and buy them rightaway! I miss the ol’ flavor of Kue Cubit!

You should try them when you come to Jakarta. The famous one is located franchised in many malls in Jakarta that has Eat & Eat Foodcourt, called “Kue Cubit Aku Dong” (https://www.instagram.com/kuecubitakudong/?hl=id). This place even accept Go-food delivery. Otherwise, you can also Google “Kue Cubit” and see what’s come up with. I can assure you that A LOT of Kue Cubit stalls.

Above, I’ve mentioned about “Laba-Laba” or Spiderweb Cakes. I don’t have my original picture but I have it outsourced, credited to this (http://dannylovetoeat.blogspot.co.id/2015/02/kue-cubit-and-kue-laba-laba.html) food blogger.

What is Spiderweb cakes? It is a cake that baked on the top of Kue Cubit mould, so the shape looked like a spiderweb. Take a look at this picture to understand what I mean: 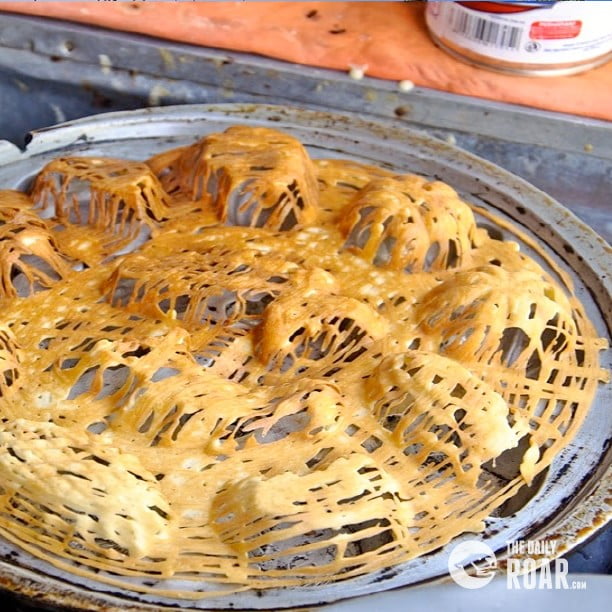 The same ingredients as Kue Cubit was used to make this Kue Laba-Laba.
Kue Laba-Laba is more crispy and so tasteful, but compared to Kue Cubit, they are thinner.

Kue Laba-Laba also often served with chocolate granula. I never tried to order them half-baked though. I don’t think you can. Not so popular as Kue Cubit, this Kue Laba-Laba can also be found in “Kue Cubit Aku Dong” stall (address above).

Happy trying and enjoy the delicious-ness of Jakarta delish food!