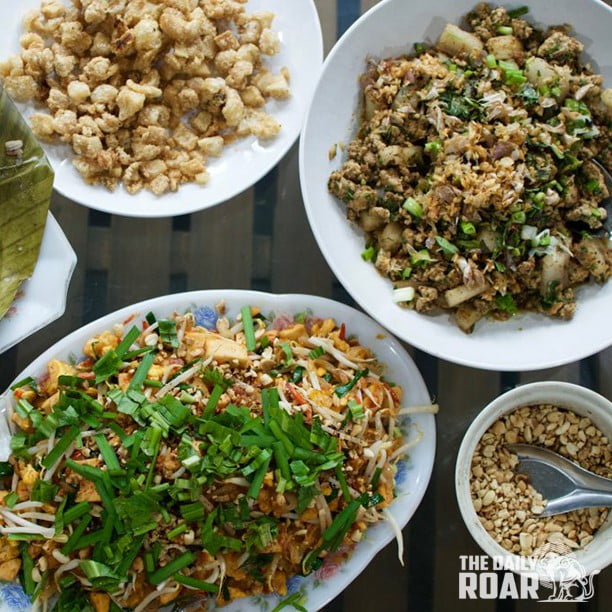 Last week in Bangkok, my friend Sine gave me some food that her mum Tar had prepared in Chiang Mai, and sent down frozen. This included Pad Thai, my all time favourite Thai dish of Khao Soi and another dish that’s hard to find in Bangkok which is Lanna laap.
It was all amazing, so when she said I could go up and cook with her mum I jumped at the chance. The only catch was we needed to drive her car to Chiang Mai, which is a nine and a half hour drive at best – It took us twelve! Was it worth it? Absolutely!

The hospitality that Tar, or ‘Mumma’ as she’d be nicknamed by the end of the weekend has shown us is unbelievable, and I was lucky enough to witness first hand another style of Thai cooking that I haven’t seen much of before.

Tar sells seven kilos of Pad Thai when she works at the market, so you know she must be doing something right! The dish I was most interested in making though was the Lanna laap or laap muang as it’s known locally. I’ve had this style of laap a few times and can never work out exactly what ingredients give it its unique taste. Lanna laap is completely different to Isaan laap,in that there is no lime juice or toasted rice powder.

The main flavour comes from a spice blend called naam phrik larb, which tastes a little bit like Chinese five spice, but hot. It gets its heat from a tiny pepper called dee phlee, also known as long pepper. It’s got a taste similar to black pepper but again it’s unique!

After my spice class, we got down to some cooking. Tar did a lot of pointing and gesturing and I did my best to follow my Thai instructions!

I minced the meat with a cleaver (which is such an important part of Thai cooking) and prepped my veg and herbs. These consisted of mint, coriander and spring onions and another herb that makes this dish unique; a herb called Pak Paew.
Pak Paew is native to Northern Thailand and has an almost soap like flavour. It’s strange because the taste by itself is overpowering but a little bit mixed in with the spicy salad it gives the whole dish a very unique flavour.

The final piece of the puzzle was a slab of pork fat poached with some lemongrass and diced.

2. Ingredients for the Lanna laap

The pork mince was then fried in pork fat (a lot of pork fat I know but it tastes so good!), with the herbs, cubes of fat and the unique spice blend and topped with loads of crispy fried garlic, so far, so good. 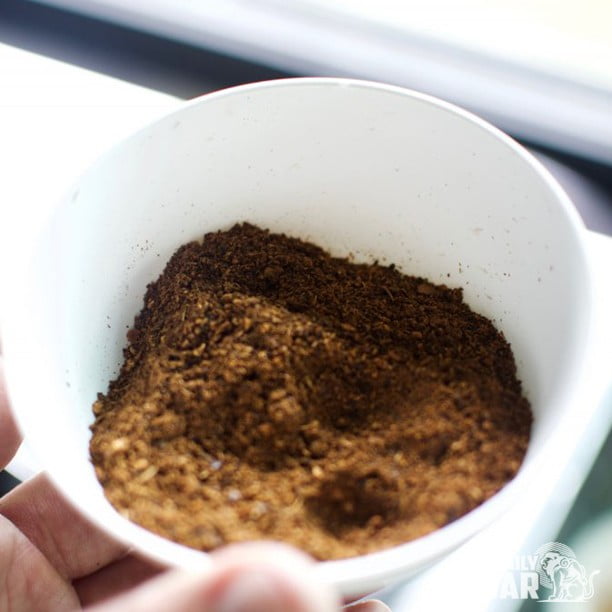 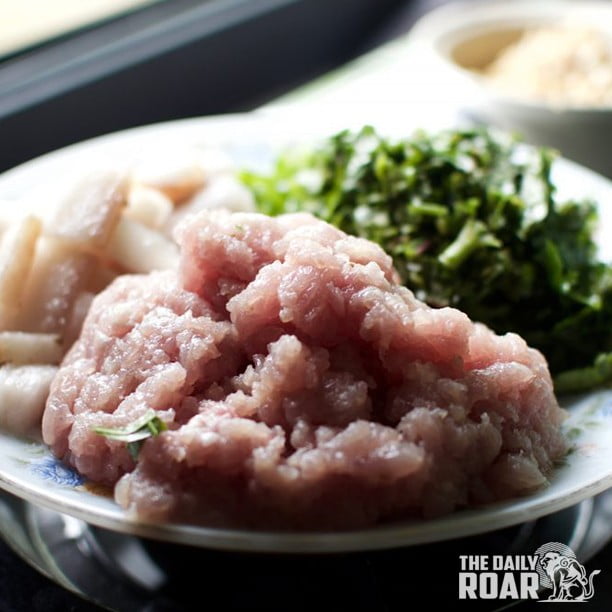 I don’t think Tar had any idea I could cook when I arrived but I think she was impressed in the end. If she wasn’t she was too nice to let on! 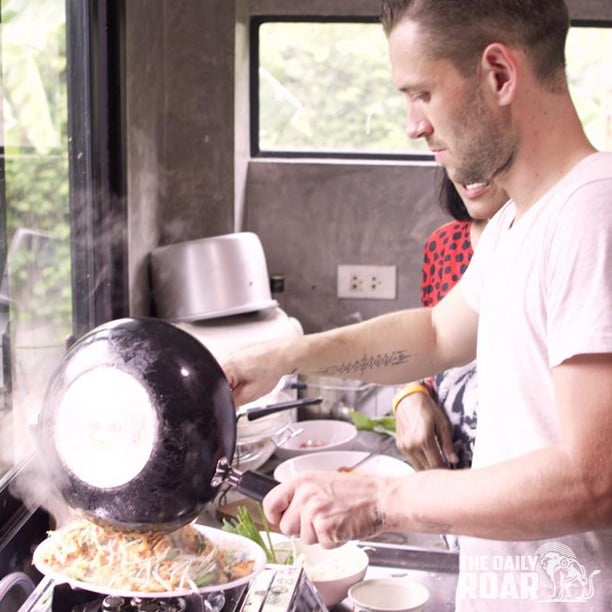 Next up was the pad Thai she’s so famous for. It’s not a Northern Thai dish originally so I was intrigued to see what spin she put on it.
We started by making a sauce of tamarind, palm sugar, Siracha sauce and salt. This was the first time I’d made pad Thai with no fish sauce, so that was the first difference I noticed. 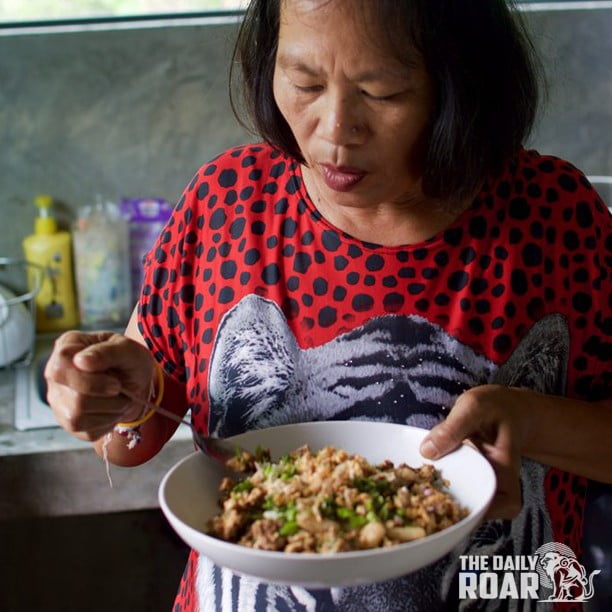 The noodles were then added to the sauce, partly cooked and set aside. We then fried the garlic, added the tofu, dried prawns and egg then went back in with the part cooked noodles.

A few minutes later and we’re ready to plate up. Tar kept a watchful eye on me to make sure everything is how she wants it!

Once cooked, the pad Thai was topped with loads fresh garlic chives (which I picked barefoot from the garden) and served with crunchy bean sprouts and toasted peanuts.
We sat down to enjoy our feast which included kap moo (fried pork rind) which Tar made and khao kan jin (steamed rice with pork blood) which we got from her friend at the market. 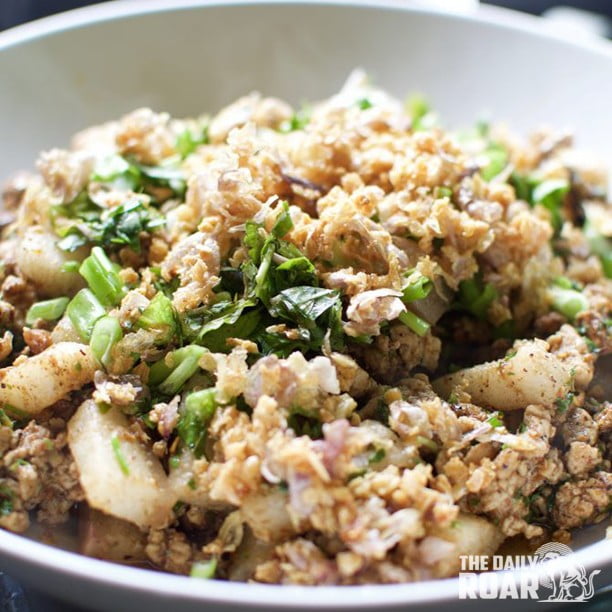 I really enjoyed it all, especially the larb. I even liked the pad Thai which I’m not usually really a massive fan of. It wasn’t greasy or too sweet and those are the two main complaints I have about a lot of pad Thai so I was happy with that!

All in all, it was such a great experience. I love the fact that Tar took time out of her day to welcome me in without wanting anything in return and for that, I will be forever grateful. For me, there really is nothing like spending time with local people and learning about different food cultures. 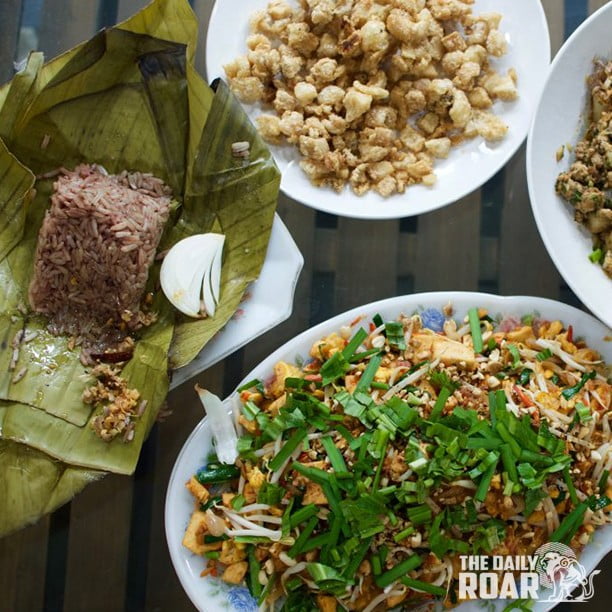