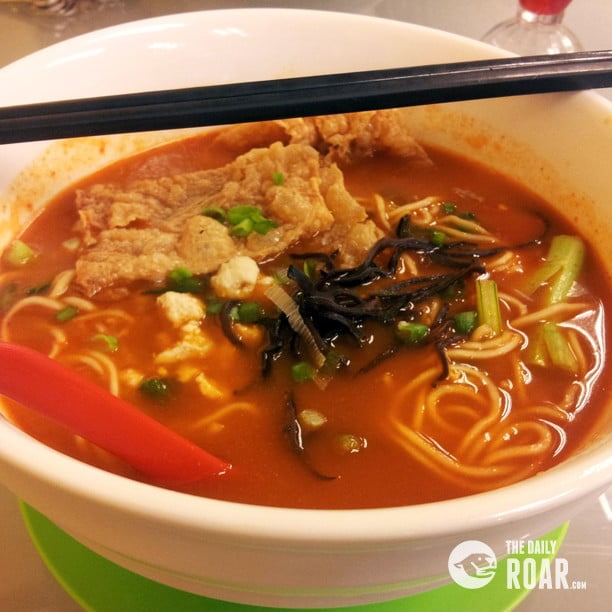 When it comes to Malaysian Chinese cuisine, one of the can’t-miss popular foods around is definitely Pan Mee. Originated from a Hakka-style cuisine, the Chinese name of Pan Mee is literally known as “flat flour noodle”.
There are generally three types of Pan Mee available in Malaysia: hand-peeled, flat strips or thin strips of noodle. Pan Mee is usually served in either dry version (where it was added with thick black soy sauce) or soup version. The main ingredient that goes along with Pan Mee is minced pork, dried anchovies, mushroom and vegetable. Pan Mee is commonly eaten for breakfast because of its light and easy meal, but it can be also eaten for lunch and dinner as well. Pan Mee can be easily found either at Chinese restaurants/food courts, hawker stalls or shopping malls around Malaysia.

Today, Pan Mee has evolved from the typical dry/soup version. Thanks to the popular demands among Malaysian Chinese, there’s a Pan Mee version where it is served in dry chilli mix. Among the most popular restaurants that sell Dry Chilli Pan Mee is Jojo Little Kitchen and Face to Face Noodle House.

But there are food entrepreneurs who get more creative with their own version of Pan Mee. Take “House of Ceggo” for instance. Located within the housing area at No.15, Plaza Danau 2, Jalan 5/109F, Taman Danau Desa, this particular noodle shop specialized for their signature Tomato and Pumpkin Pan Mee. Their Tomato Pan Mee is especially very sellable. Served in tomato soup (which also available in dry version), Tomato Pan Mee tastes very appetizing and yet fulfilling enough to satisfy your taste bud. Moreover, it’s worth noting that adding tomato can be overwhelming because of its sheer tangy flavour. But in the case of this Tomato Pan Mee, the tomato soup tastes just balanced without overpowering the rest of the ingredients that comes along with it. Similarly, Pumpkin Pan Mee is also tastes just as nice and delightful. Even though this signature Pan Mee priced at RM7.80, which is above range than your average Pan Mee, it remains reasonable enough because of its generous portion.