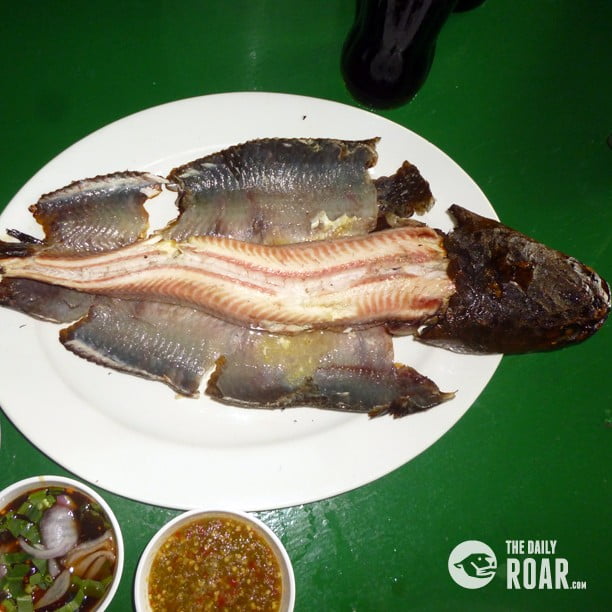 In Central Thailand, Singburi Province is a top place for people who like to dine on delicious river fish. Whilst Singburi often falls very far from many tourists’ radars, there are a few local attractions of note to give you enough to see and do … between your fish feasts! These include temples, ancient kilns, a memorial to local heroes who perished during battles with Burmese invaders, museums, the town spirit house, the European style City Hall, and a couple of nice swimming pools.


There are many fish in the provincial rivers and waterways, and no license is needed to fish … if you’re a keen angler you can come and fish all throughout the days (and nights!) The Mae La River is particularly famous for its fish, and they are aid to be some of the most delicious in Thailand. Head out to Bang Rachan or Inburi Districts for some of the best fishing spots.


Fish are so popular in Singburi that there is even a Fish Eating Festival close to the end of the year. There are many local specialities and delicacies as well as live music, games, competitions, and market stalls. It’s a very lively affair!
When it comes to eating, the Mae La catfish and snakehead fish, known as Bpla Chon, are both local treats. Although you will be able to find them in other parts of the country, why not try them in the place that is most well-known for them? A place where they extra-special care and skill is taken in cooking them?


The tasty fish dishes are typically served with small bowls of spicy and tangy sauces for dipping, as well as steamed vegetables. If you’re feeling particularly hungry you can also add plain boiled rice. The large fish are perfect for sharing.


If you need further persuading, have you ever heard of Khrua Hua Pa? It is the first Siamese cookbook and it is filled with delicious traditional recipes. Born from a King’s visit and the food that was prepared for the Royal party, it was so tasty that the style of cooking returned to the capital and was used when preparing meals for members of the elite classes and high society. This method of cooking and the recipes originated in Singburi!