Tết Holiday is also known as an occasion of continuous feasts. As a result, your stomach may feel a little unpleasant due to various kind of food like meat, fat, shrimps, crabs… but nevermind as long as you don’t forget to use cơm rượu!

Cơm rượu is also called fermented glutinous rice in english.
First of all, the glutinous rice is cooked, then it is mixed with yeast and rolled into small ball-form. Next, people put the glutinous balls into a covered jar and put the jar in an airtight place. When a milky liquid appear in the jar, which is rice wine, these balls are already to be served with its rice wine and people serve this food by spoon.

Indeed, probiotic substances in cơm rượu not only have a good influence on the process of food digestion but also cause a light sensation down the body of drinkers. The sweet smell of cơm rượu brings a tender excitement to them, it is like the power of a high-class wine! The most charming thing is a light sour and greasy taste over your upper jaw after chewing. For this reason, during Tet holiday in Go Cong (Tien Giang) and Can Giuoc (Long An) areas, it is common to eat xôi vò (glutinous rice cooked with split peas) together with cơm rượu.

The combination of nếp dẻo (glutinous rice) – đậu thơm (sweet pea) – cơm rượu is so sweet and elegant that it can lead eaters to the edge of feeling excited!

Not just xôi vò, other dishes abundant in protein such as pork bologna (chả lụa), chicken, pork… all yield to this “pungent tea”. It is called “tea” since cơm rượu is naturally sweet.

Enjoying cơm rượu in style includes both eating the rice and drinking its water, this explains why our ancestors always said we “eat” cơm rượu, not “drink” it.

Remember that for women only using a small cup of cơm rượu before or after a full meal of meat and fish is enough. If they couldn’t contain themselves and use more than one cup, they might get drunk at any time without realizing it. Once the writer’s family invited their neighbors to come for the anniversary, the ladies all praised this cơm rượu to the skies, they couldn’t help asking for more. At the end, almost everyone travelled on rough road, tottering like a drunken people. They even wore wrongly each other shoes, not until the next morning did they noisily start to get back their own ones. How funny!!

In addition, housewives can use some spoons of cơm rượu to rub over a chicken with a little pepper, fish sauce, onions, chopped-fine coriander then wait 20 minutes before steaming. Using this kind of cơm rượu to simmer with duck also makes such a tasty dish! 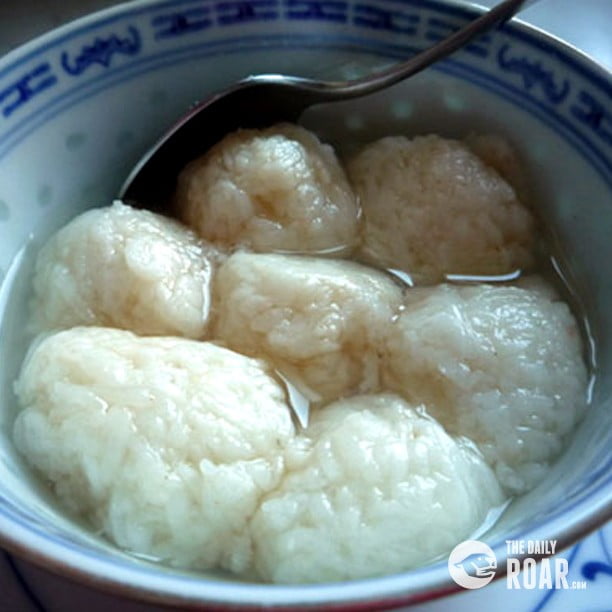 If having leftovers, don’t throw it away hastily, it can be used to process into a remedy which helps to prevent having indigestion, diarrhea, dysentery effectively. Pour the rice and its water into a clean pot. Grill a few bulbs of garlic, roots of ginger, a pinch of white pepper and take them to grind. After that, put this mixture in that pot, cover carefully with layered plastic bags and burying the pot under a banana tree or a guava tree or inside a flowerpot in your garden. After 3 months, the water of cơm rượu will turn into amber and smell fragrant. (Such recipe is used for half a liter of cơm rượu – with both the rice and its water)

If someone in your family has loose bowels or dysentery, drink 2 to 4 small cups of cơm rượu ’s water once after 3-6 hours, he will recover quickly. Of course you can try this for sure.

Finally, cơm rượu which is caused fermentation in the North is often tastier than in the South of Vietnam because northern glutinous rice using to make cơm rượu is not husked carefully, it still remains shells which are full of vitamin. This kind of rice is bought in supermarket system in Hanoi or other grocery stores of northern products in HCMC with a reasonable price.