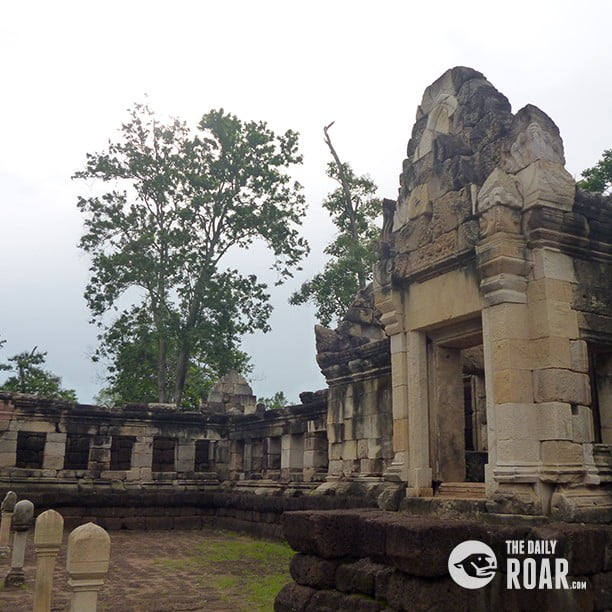 Prasat Sdok Kok Thom is located in the eastern Thai province of Sa Kaeo. The complex is reasonably large, and it is one of the largest ancient ruins in the province. Situated close to the border with neighbouring Cambodia, the ruins are a legacy from the Khmer era. The Khmer Empire, from what is now Cambodia, once controlled the Sa Kaeo area, as well as other parts of Thailand, and indeed, other parts of Southeast Asia.

If you have been to the world-famous Temples of Angkor in Cambodia’s Siem Reap, you will notice that, although far less extensive, the ruins at Prasat Sdok Kok Thom share many architectural and design similarities with their more well-known cousin. 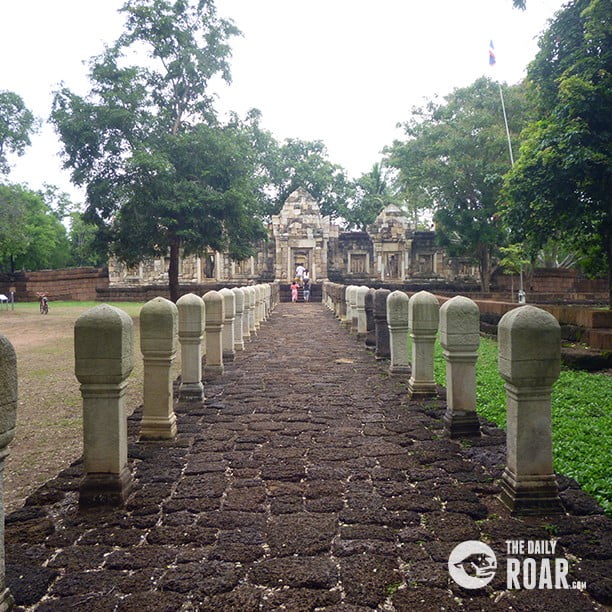 It is a short walk from the parking area, along a pillar-lined path, to reach the entrance to the complex. Surrounded by trees and woodland, it is a peaceful site, and you will really feel as though you have left all the hustle and bustle of city life far, far behind you. A remote and lesser-visited attraction, it is a great place to escape the crowds and take a peek into the past.

Built in the 11th century from sandstone and laterite, the temple was originally dedicated to the Hindu god of Shiva. It was later changed to a Buddhist temple.

There are three old buildings amongst the ruins, as well as a swampy pond. The buildings have been extensively restored (in the 1990s) to show today’s visitors how the site would have looked in its heyday. Although the restoration works are very visible, it is, nonetheless, a terrific place for anyone interested in history. You can wander around the sturdy protective walls, picking out religious symbols, floral artwork, and characters from ancient myths, legends, and folklore delicately carved into the stones. 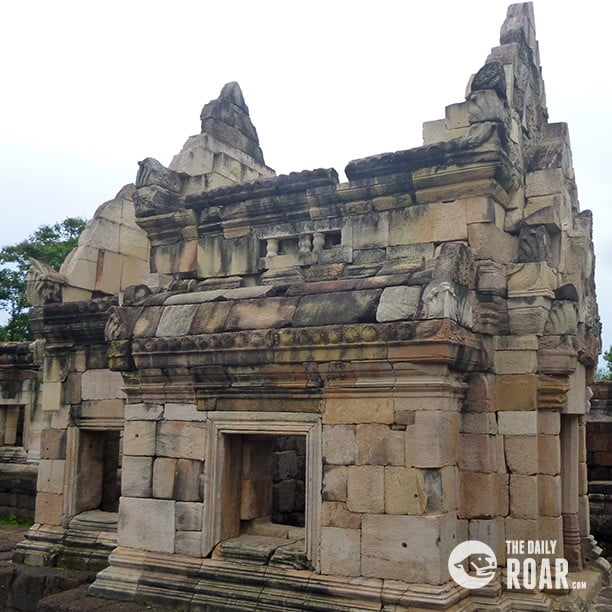 The site faces to the east, and a gate marks its direction. A tower stands in the middle of the complex. This was once the temple’s main sanctuary. The other two buildings are what are known as libraries. The buildings are located around a large inner courtyard, and a moat surrounds the outer walls.

Holding a firm place in history, an important and revealing inscription was discovered at Prasat Sdok Kok Thom. Words carved into a large slab of sandstone, dated as 1053, allowed the world to know more about the once-mighty Khmer Empire. Written in the ancient language of Sanskrit, the carved document contained information relating to the leaders of the Khmer Empire, important events from that era, social organisation in those times, the central parts of the empire, day-to-day life, and the faith that many people followed. It also detailed how and why the complex of Prasat Sdok Kok Thom was created. Although the slab is now housed in the National Museum in Bangkok, it is interesting to know that such useful insights came from an artefact discovered at this very site.

Situated close to the village of Ban Nong Samet, there have been claims made by the Cambodian government that Prasat Sdok Kok Thom is, in fact, on Cambodian territory. This is a claim that is, naturally, heavily disputed by Thai officials.

If you feel a bit thirsty or peckish during your visit, don’t worry – as with almost every place in Thailand, there are food and drink sellers within easy reach. There are also vendors selling a basic selection of gifts and souvenirs. Although it is not a long walk to the temple and around the site, you can rent a bicycle to explore more of the surrounding woodlands if you so wish. Admission to Prasat Sdok Kok Thom is 50 THB per person.