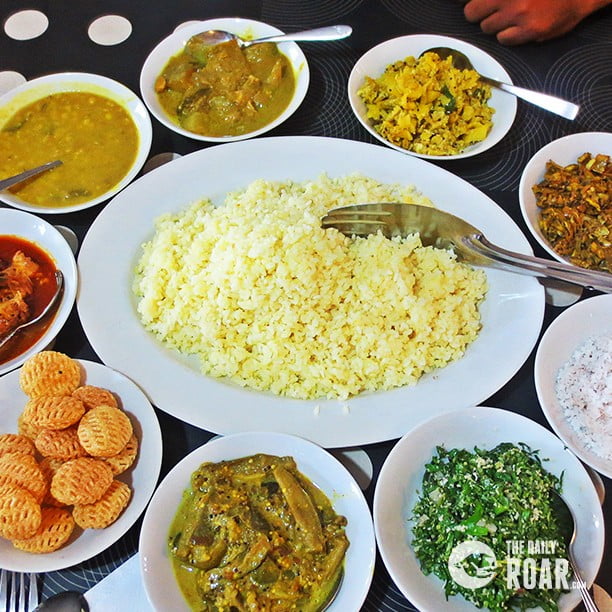 Sri Lanka, the beautiful spice island once known as Ceylon, is a rich melting pot of cuisines. It seems every nationality that has visited and traded over the years has left its mark – the Dutch, Portuguese, English, Arabs, Malays, Moors and Indians. Sri Lanka banquets are incredibly colorful, with curries that range from yellow to deep brown, the vibrant greens of the vegetables, and the bright colors of sambol.

The staple meal is a large serving of rice accompanied by up to twelve different side dishes of vegetables, egg, meat, or fish stewed together with peppers, spices, and often coconut milk. This rice and curry meal is traditionally eaten at midday, although it may also be served in the evening. The traditional morning and evening meals are usually composed of a traditional starchy staple, such as string hoppers (fresh rice noodles), hoppers (cup-shaped pancakes), roti (coconut flat bread), or thosai (sourdough pancakes), served with a sambol (a mixture of hot peppers and other vegetables, served cool) and one or two curries.

The rice and curry meal, at its finest a miniature banquet whose contrasting flavors – coconut milk, chilies, curry leaves, cinnamon, garlic and “Maldives fish” (an intensely flavored pinch of sun-dried tuna) signifies to Sri Lanka’s status as one of the original spice islands. There are plenty of other unique specialties to explore and enjoy – hoppers, string hoppers, and plentiful seafood. It will cost somewhere around 1.2 $ with fish and far less without it.

Another interesting dish is Kale Mallung (kale and coconut salad) you’ll find it in this light salad that combines shredded kale, scraped coconut (pulpy coconut bits), onion, chilies, turmeric powder, and salt. This Mallung (Sinhalese for “mix-up”) is a dry salad, but with the peppers and coconut protein packed into the leafy meal, you’ll have zero want for dressing.

Sri Lankan cuisine can be incredibly fiery – sometimes on a par with Thai, and far hotter than most Indian cooking. Many of the island’s less gifted chefs compensate for a lack of culinary subtlety with liberal use of chili powder; at the same time, as a tourist, you’ll often be seen as a weak-kneed individual who is liable to faint at the merest suspicion of spiciness. You’ll often be asked how hot you want your food; “medium” usually gets you something that’s neither bland nor requires the use of a fire extinguisher. If you do overheat during a meal, remember that water only adds to the pain of a burnt palate; a mouthful of plain rice, bread or beer is much more effective.

A variety of snacks and beverages are also eaten periodically throughout the day. Strong, sweet tea, usually with milk, is drunk alone or following a small serving of finger food or sweets, especially at mid-morning and late afternoon. Curd, a yogurt made from the milk of water buffaloes or cows, is often served as a dessert with palm syrup or sugar. A rich variety of fruits is available year-round. 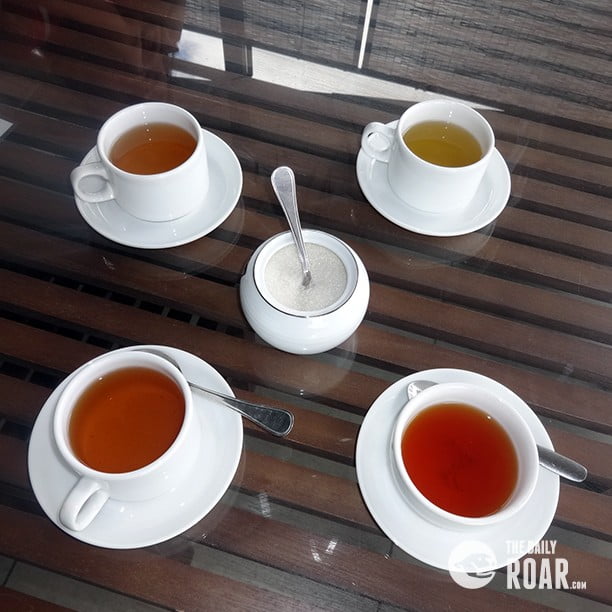 Eating outside of the home has not been very common, although it is becoming more so. In almost every town there is at least one Chinese-style restaurant where alcohol is also served, as well as Sinhala, Muslim, and Tamil restaurants and traditional snack booths. In the capital, Western chain restaurants, as well as other foreign-style foods, are increasingly available.

There is some ethnic variation in foods and customs, as well as food taboos. For instance, Muslims avoid pork while Hindus are often vegetarian. Sinhala and Tamil people tend to take care that the foods served together to create a balance of hot and cold energies. They also typically will not accept food prepared by those of relatively lower caste status.