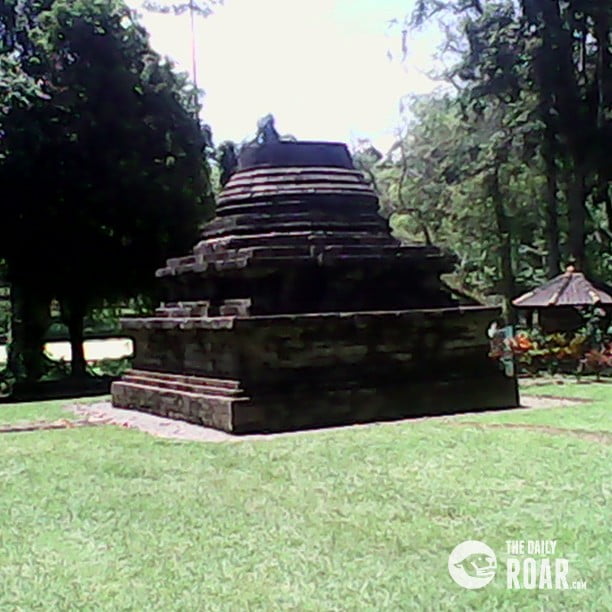 Sumberawan temple is actually a stupa, located in the village Toyomarto, Singosari, Malang, East Java Indonesia. This temple is a relic of the Singhasari Kingdom and used by Buddhists for religious activities at that time.

The temple is made of andesite stone with a length of 6.25 m, width 6.25 m, and 5.23 m high, built at an altitude of 650 m above sea level, in the foothills of Mount Arjuna.
Sumberawan temple was first discovered in 1904, during Dutch colonialism in Indonesia. In 1937 the Dutch East Indies held a restoration of the bottom part of the temple, while the rest are reconstructed in emergency. Sumberawan temple is the only stupa found in East Java. It’s simply a plain stupa without any upstairs neither reliefs, gods/goddess statues as well as any sacred figures.

Allegedly, Sumberawan Temple’s shape is similar to the main stupa at the top level Arupadhatu Borobudur, which symbolizes the attainment to Nirvana. Temple with stupa form usually constructed as a form of Buddha with a function for storing Buddha relics or pilgrimage purposes. Stupa shape can also be associated with the meaning of the mountain into a greatness and majesty: the God Almighty.

The existence of a Buddhistic temple in Singosari proves that since time religious diversity is very much appreciated, considering Singhasari remained a kingdom with a large number of Hindus at that time.

Experts convince that Sumberawan temple formerly called Kasurangganan, or a place that is surrounded by nymphs. It is quite acceptable because the stupa erected near a crystal clear lake, surrounding by a natural and soothing rice-fields and trees. (dyah)