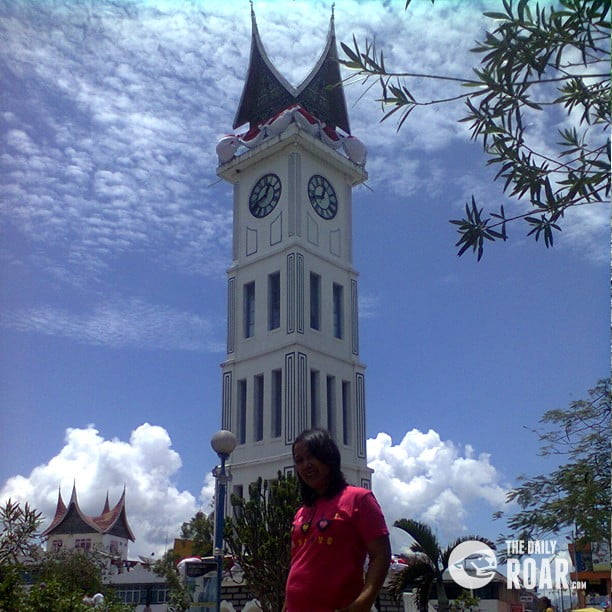 If you are travelling to Bukittinggi – West Sumatra, don’t forget to visit Jam Gadang. In English “Jam Gadang” which means ”The Big Clock”. How big is it ? Let’s check it out. I have always been interested to visit Jam Gadang ever since I lived in Yogjakarta 3 years ago. The building is unique and has something mysterious. After living in Sumatra, I was excited to go to the Big Clock with my husband. Jam Gadang is a big tower and has four clocks in each side on the top of the tower. Its located in the heart of the tourism city Bukittinggi in West Sumatra. Jam Gadang has become the city’s icon and attracts thousands of tourists, domestic or international. A lot of people say, “Jam Gadang is so unique and has its own mystery.” And the MSYTERY is what attracts me so much to come and visit it.

Jam Gadang was built in 1926 as a gift from the Dutch’s Queen to Rook Maker the secretary of Bukittinggi city in that time. And exactly, Jam Gadang has another Twin in the other side of this world. Where is it ? Yes, The Twin is on London : THE FAMOUS BIG BEN TOWER! The buildings are quite similar to each other. Besides, the Clock Tower ( Jam Gadang ) is the history of Indonesia, where Bukittingi was once the capital of the Republic of Indonesia while Yogyakarta was the place where the emergency government of Indonesia was located after it falled into the hands of the Netherlands in 1948-1949. 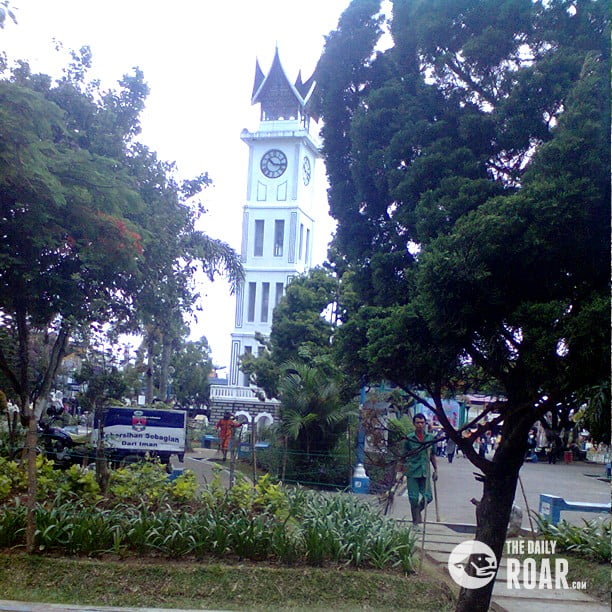 I am posing around the view to the top of the Jam Gadang in the middle of a hot day. The peak together with the Clock Tower was shaped in the colonization of the Netherland the temple in the Japan’s colonization 1942-1945, and after the Independent Day of Indonesia Merdeka it was shaped into a traditional Minangkabau house. Only one part that has never changed are the Roman numerals on Jam Gadang. This is why the tower is quite unique.

I saw the numbers one by one. And when it shows number 4, it should have written IV, but it is written IIII. Not many people know about this. They just know this figure is unique and only places on Jam Gadang. But if you think about it better, if written IV can be interpreted as “I and V”, “I to I” and “V for Victory”. I Victory? Means “Freedom”? Looks like the Victory symbol is not desired by the invaders at that time.But whatever!