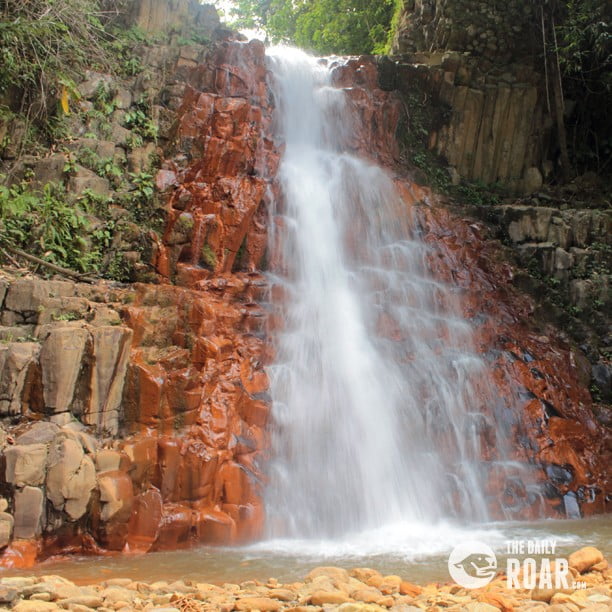 In a valley deep in the heart of Valencia in Negros Oriental, far from the noises of cities and
the hustle and bustle of foreign tourists, is the forgotten paradise known only to locals as
Pulangbato.

Pulangbato, its name derived from the Filipino word “pula” (red) and “bato” (rock), is one
of the Valencia’s best-kept secrets. While foreign tourists head out to the beaches, locals flock
to this place for a bit of R&R.

Rent a motorbike or a van from Dumaguete and find out the directions from a local. If you
want a guided tour, you can ask your travel agent or hotel to arrange a visit.
It’s a long, scenic drive up a mountain punctuated by geothermal vents emitting sulphuric
smoke. But the journey doesn’t end when you climb up the stairs to a view of a small
waterfall with a natural pool and a man-made lagoon of freshwater from the spring, no.
(Don’t believe those who say so.)

In fact, that’s where the journey begins.

Most tourists are satisfied by that view. Most tourists will probably feel disappointed. The
scene probably wouldn’t be extraordinary. People would probably ask why it’s called
Pulangbato when the rocks aren’t really that red anyway.

But that’s not the falls that explain why Pulangbato is called as such. Those who want to
know why, those who dare to want more, should be ready for a long and rather intermediate
hike that follows the course of the river.

Take a rest from the ride and the climb before setting to see the real reason Pulangbato
deserves its name. Lounge around in the huts or swim in the pool. Once you feel ready, head
to the mountain and follow the trail. If you’re planning to bring anything with you, take it
in a backpack and bring a small trashbag.

A few gashes here and there, and maybe a few aches after, the thick green of the foliage will
begin to open up to the red of an immense cascading waterfall that ends in a wide pool and
opens up to a river. Words and photos pale in comparison to the feeling of standing in front
of this grandiose site.

Tucked away in a remote valley in a small town in a country known mostly for its beaches,
it’s a beautiful, unworldly secret. Something that deserves to be preserved in its current state
forever. The wet red rocks, the dry orange ones, the coolness of the river, the green of the
foliage, and the blue of the sky will all make it easy for you to forget time and what lies
beyond for you after this.

It will be an enormous effort for you to remember, to finally take your eyes away from it and
head back. But be sure you do. Be sure you head back before the sun starts to set because the
journey back will probably be impossible in the dark.

Once you set out to head back to the main falls, take nothing, leave nothing, and kill
nothing. Pulangbato deserves to be protected for the next generation’s delight.