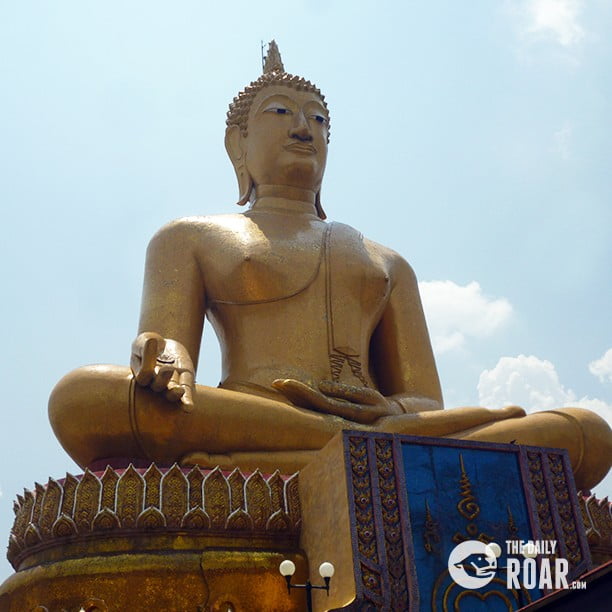 Located in the Thai province of Singburi, Wat Pikun Thong is one of the province’s main sights. A lovely temple, you can see its large seated Buddha image gleaming and glinting in the sunshine as you approach the temple. The statue is 42 metres tall, which is pretty impressive! Its stature is further enhanced by the fact that it is 23 metres wide.

The large seated Buddha statue is in the pose of giving a blessing. The Lord Buddha is shown sitting with his legs crossed, one hand draped across his knee and the other hand resting in his lap. Whilst the statue is one of the biggest Buddhist statues in Thailand, this statue at Wat Pikun Thong is the largest statue in this particular posture in the whole of Thailand. The position is known as Phra Phutthasuwanmongkhon Mahamuni, or also Luangpho Yai. Made from concrete, the statue is covered in shimmering gold. It is certainly very peaceful-looking and eye-catching.

Whilst the large Buddha statue is a definite highlight of Wat Phikun Thong, there are plenty of other religious and spiritual statues located throughout the grounds. There are statues of the Lord Buddha that represent the different days of the week – try and find that one that corresponds to the day on which you were born and make a small donation.

Colourful statues of animals and cartoon-like people can also be found on the grassy areas around the complex, including small cute bunny rabbits and smiling tigers.

It is worth taking the time to look in the various buildings and halls dotted around the complex. One is home to a small museum dedicated to the life of a previous abbot of the temple, Luang Pho Phae. Indeed, locals sometimes refer to the temple itself as Wat LuangphoPhae because of the former abbot. The museum tells the story of the esteemed monk’s life, and also contains some of his personal objects and effects.

Another open-sided building depicts scenes from Buddhist Heaven and Buddhist Hell, with striking pictures painted around the inner section. Walk around and admire the beatific scenes from Heaven, before shuddering at the ghastly acts that are said to take place in Hell to punish people for an array of worldly sins. You’ll see images that show angry animals ripping people limb from limb, bloodied bodies strung up from trees, people being boiled in a gigantic cooking pot, and more. It’s definitely quite ghastly and eye-opening!

You can feed the fish in the large pond, said to bring good luck and fortunes. Vendors sell bags of fish food close to the pond, and there is a shaded over-water walkway where you can stand to toss food to the waiting mouths below. 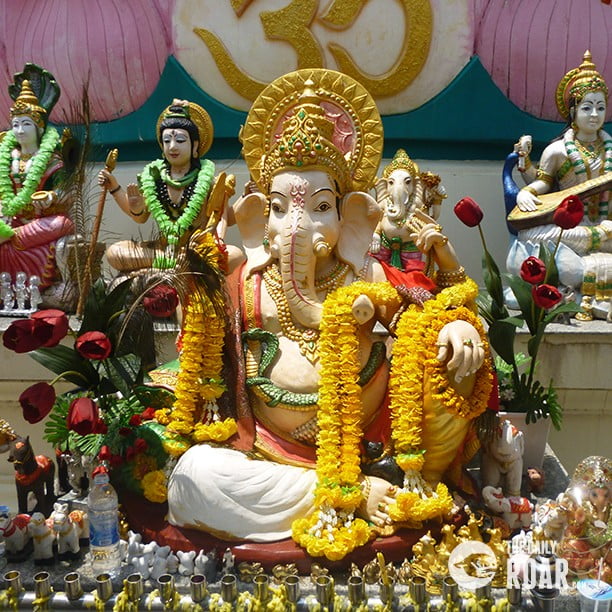 Just a short walk away from the main temple complex you’ll find a shrine dedicated to the Hindu elephant god, Ganesha, complete with many fascinating statues. Remember to take your shoes off to walk along the bridge to the shrine, and try to stay in the shaded parts to prevent your feet from burning on the hot tiles!

Several vendors sell snacks and drinks in the temple’s car park. Expect to spend a couple of hours enjoying the site. Admission is free, although donations are very welcome, and the temple is open from 6 am until 5 pm each day.