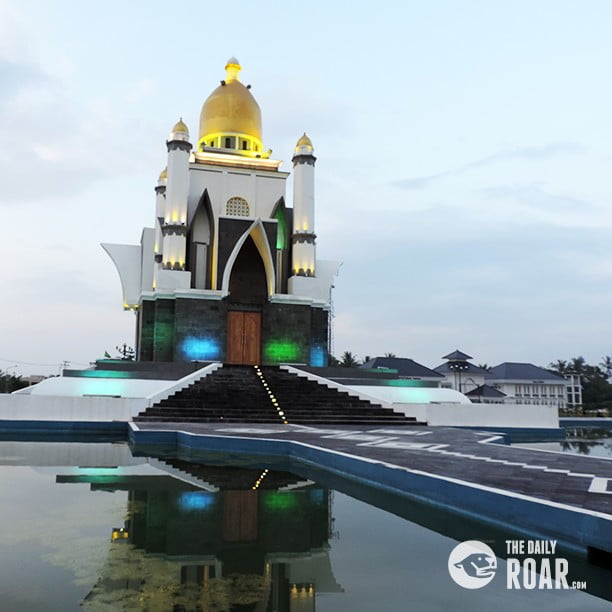 When you travel to Lombok, I bet you will pass by this monument. Located just in the heart of West Lombok, in a roundabout where traffic flows from and to the direction of Lombok International Airport and Lembar Harbour, this monument becomes the new face of Lombok. This roundabout and monument simply becomes the main gate to enter Lombok Island, either by sea or by air.

This monument is known by many names. Some call it as Tugu Giri Menang Square, some as Bundaran Giri Menang, Bundaran Kubah Emas, Bundaran Simpang Siur, and many others. However, most of the time people call it as Monumen Lombok Barat Bangkit or shortened as MLBB, which means “Monumen of The Rise of West Lombok” in English. As many of us know, West Lombok has many of nature potential that is still not that well-organised yet, such as Sekotong Beach for example. Built by government in 2013, this monument is made to symbolize the rise of development as well as the seriousness of government towards the tourism improvement in Lombok, to be exact West Lombok, like the name suggest.

The building itself has an area of 174 square meters and height of 19.8 meter with 3 floors. Sitting just next to this monument is a 70 meter diameter pool and water fountain. In the afternoon, this monument might look just like the other ordinary monuments in Indonesia. But at night, it transforms into good and unique looking monument with water fountain, thanks to the good lighting system which makes it more appealing. Sometimes it can also be heard the traditional backsound music which accompanies the rhythmic motion of the fountain jets. At first glance, the architecture of the monument resembles Taj Mahal. But on the top of it, there is dome, showing the religious symbol as majority of people in Lombok are Muslim.

Beside the monument, there is Giri Menang City Park which has many different facilities, like playground, volley court, basketball court. Also, there is a culinary place where there are many food stalls selling the traditional special food of Sasak people in Lombok, such as ayam taliwang, plecing kangkung, etc. Parking lots is also provided so it won’t disturb the traffic. This park is a good leisure place, particularly at night and for local people in Gerung district, West Lombok.