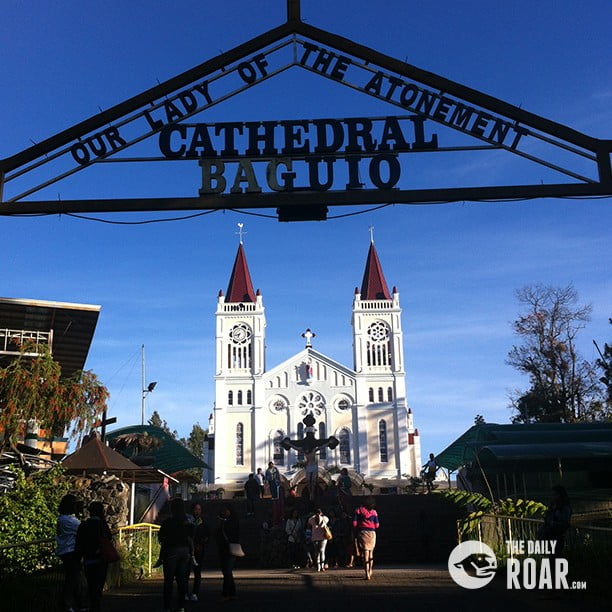 Baguio City is not only about being famous. This city is more than being celebrated as the Summer Capital of the country for the past 99 years. Although many tourists come here for its cool climate and it has at least eight degrees cooler than any place in the lowlands, people visit the place because of their worship to God.

Situated on top of a hill in the heart of the city is the “Baguio Cathedral”. Few people know that this cathedral is actually named Our Lady of Atonement Cathedral. This is a Roman Catholic cathedral located at Cathedral Loop adjacent to Session Road. Dedicated to the Blessed Virgin Mary under the title of Our Lady of Atonement, its distinctive pink exterior, twin spires and stained glass windows make it a popular tourist attraction in Baguio. It served as an evacuation center under the Japanese Occupation during Second World War. 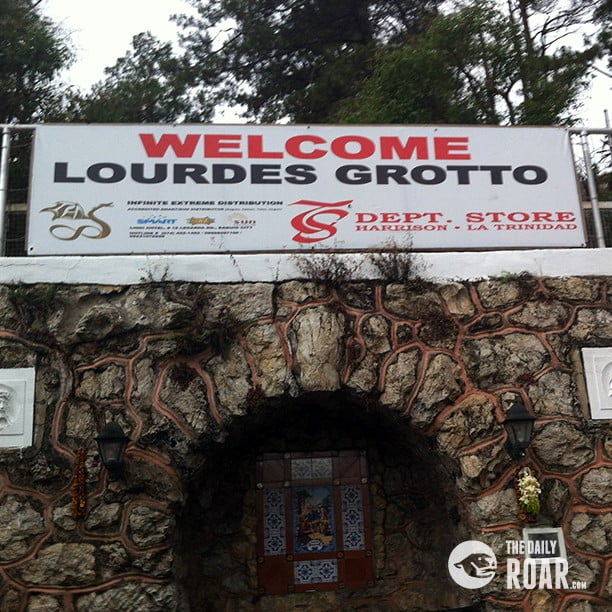 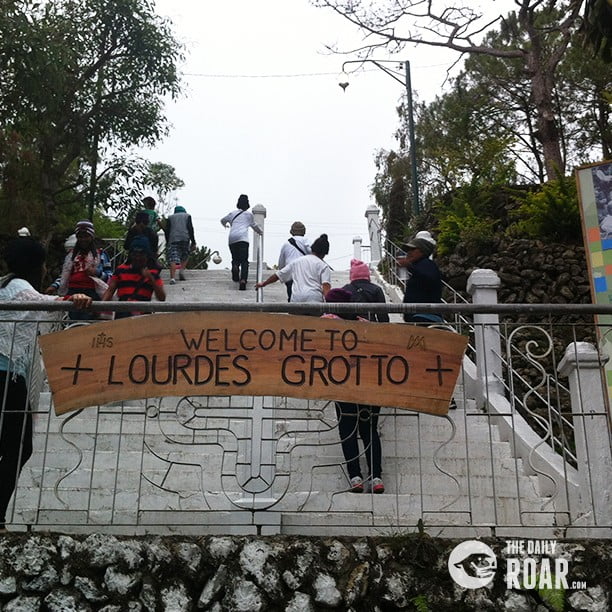 Ibaloi people referred the hill where the cathedral stands as “Kampo”. Belgian missionaries from the Congregatio Immaculati Cordis Mariae,in 1907 established a Catholic mission in that site which later they called it Mount Mary. Reverend Father Florimond Carlu lead the construction of the cathedral itself in year 1920 and was completed and consecrated in 1936 receiving dedication to Our Lady of Atonement. During the Second World War, the cathedral was an evacuation center, and it withstood the carpet-bombing of Baguio by Allied Forces during liberation on 15 March 1945. The remains of the thousands that had died in the bombardment are interred within the cathedral precinct.

Being one of the country’s’ most beautiful architectural structures and easily Baguio City’s most magnificent building, this church is richly-decorated inside, it stands majestically atop Mount Mary Hill, with a wonderful bird’s-eye view of Session Road and the city’s landscape. The church has a unique pink façade with a rose window and twin square belfries with pyramidal roofs. Within its large courtyard is a viewing deck that overlooks Session Road and the downtown commercial district of Baguio. The cathedral is accessible to pedestrians from Session Road via 100-step stone staircase that ends at a Calvary, or through the adjacent campus of Saint Louis University.

There is also a botanical garden just outside the cathedral with different flowers and plants. You can also take photos of statues showing the simple life of residents there and a simple park for fun for kids.

It is not surprising that Our Lady of Atonement Cathedral is the center of religious activities such as during the Holy Week. There are about thousands of devotees from Metro Manila and the provinces come up to the city. During Sundays and other special holidays of the Catholic Church, you will find vendors along the stairway and also at the church’s open patio selling flowers, balloons, newspapers, sweepstake tickets, candles, rosary beads, and other religious articles. Visitors desiring to visit Baguio on a tour should avoid coming up to the city during this religious week. Not only is the city crowded with people, it is difficult to find rooms in hotels and inns and the prices of native handicraft, souvenirs, vegetables, flowers, food, and other commodities & services are rather expensive.

Masses and Weddings at the Baguio Cathedral

Each single mass can accommodate up to 850 persons on both floors, and those outside where loudspeakers have been set up in order to hear the mass within the crowd especially on Sundays.

Weddings are also available in the cathedral. These are always held in the middle afternoon, which is perfect for the couple to be able to freshen up and attend to other matters; like formal photo shoots and prior to their wedding dinner reception. 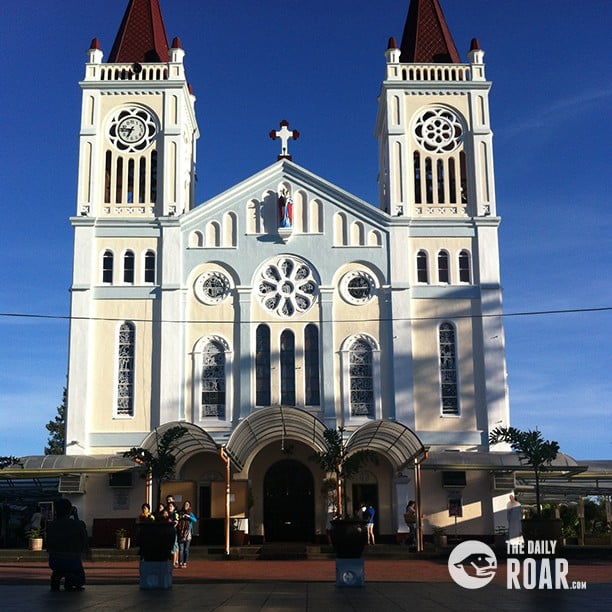 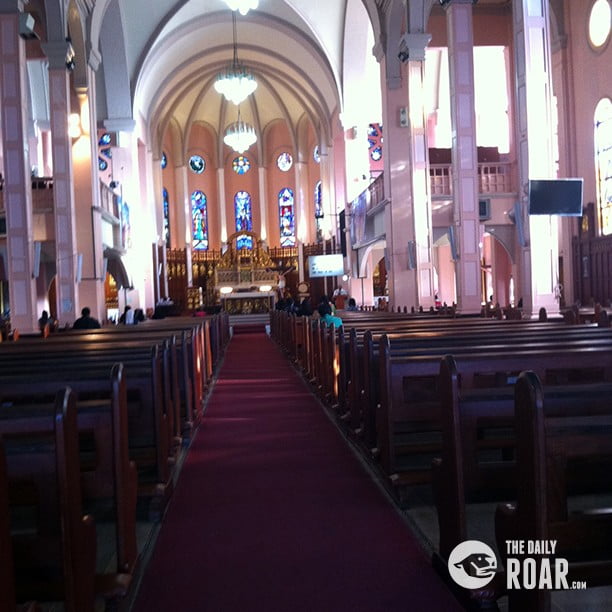 If you want to have a panoramic view of the downtown commercial area, Burnham park, city hall, and Camp Allen, the view deck at the cathedral is a favorite among visitors. The cathedral has undergone extensive repairs and renovation and was re-opened to the public last November 25, 1990 during the celebration of “Christ The King.”

How to go there

If you are riding Genesis, Dagupan or Saulog Bus, just drop off along Gov. Pack Road and you have to walk your way to Session Road. Then, cross the street until you see the Cathedral Baguio just near upper Session Road and Post Office Loop.

Located on a high hill in the western part of the city is the Lourdes Grotto. This grotto is another Catholic shrine and place of meditation in Baguio. It is where you will find the image of the Lady of Lourdes.

The popular 252-steps to grotto

Access to the top of the grotto could be made by climbing the 252 steps or by driving a light vehicle through a winding, narrow and steep asphalt-paved road. The grotto is a favorite pilgrimage site during Holy Week most especially during Holy Thursday and Good Friday. Devotees light up a candle at an altar below the image. There are also merchants at the shrine who are willing to light up a candle for you and say a prayer for whatever personal intents you might have.

The grotto was constructed to venerate the numerous visions of the Virgin Mary by a 14-year old French girl named Bernadette Soubirous. This happened in 1858 from February 11 to July 16 in the town of Lourdes which is in southwestern France. The visions were declared genuine by the Pope in 1862 and this also led to the authorization of the cult of Our Lady of Lourdes.

By following the road a little further up and behind the Grotto you will see a strip of Naguilian Road and a beautiful panoramic view of a part of the province of La Union. When the sky is clear Lingayen Gulf and portions of the province of Pangasinan are also visible. Since the fog usually comes in by about mid-afternoon, it is best to visit the place early in the morning especially if you want to take photographs.