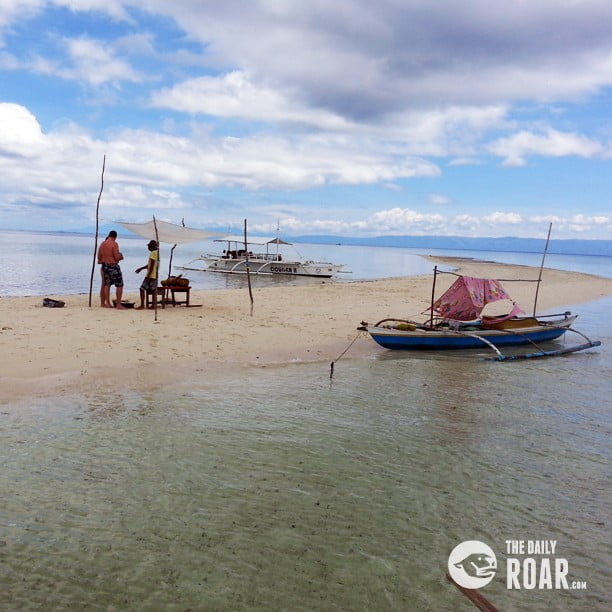 Traveling is my door to gastronomic adventures. It is my opportunity to eat something I’ve never tasted before. It’s a pleasant deviation from my usual menu and a week of traveling in Bohol just proved that statement.

Aside from the seeing the wonderful sites in Bohol like the magnificent Chocolate Hills, centuries old Baclayon church, and Bilar man-made forest we also made sure that we had superb local dishes. Little did I know that I’ll be eating something fresh and rare.

We also booked for an island hopping tour. We were first taken to Balicasag Island for our snorkeling adventure. Balicasag Island is one of the best snorkeling sites in the world with colorful corals and fishes. Though I’ve snorkeled in Mindoro and Boracay, the colors of the sea creatures in Balicasag were more vivid.

After an hour of snorkeling, we got too hungry and we ordered grilled fish freshly caught from the waters of Balicasag. I sort of felt guilty because after enjoying the colorful fishes at sea, some of those were served on our dining table. The cook did not put a lot of spices. The fish was dashed with salt, grilled, and then served with rice. The fish was almost sweet because of its freshness.

When we were on our way to another island, we caught a glimpse of a sandbar in the middle of the ocean. It was like a scene in the movie “The Ten Commandments” where Moses parted the sea to free Israelites from Egypt. In this scene, instead of chariots and people fleeing for their freedom, the sandbar was surrounded by small boats with tourists.

Then a man approached us with his pail selling sea urchins he caught. He cracked one small sea urchin then placed the “meat” on my palm. As I swallowed it, my reflexes told me to spit it out. But my adventurous brain told me to eat it. At first it was revolting because it was gooey and tasted like sand with high salt content. As it travelled down my throat, it started to taste like sashimi and with pleasant surprise, I liked it. Even without soy sauce and wasabi, it’s perfect on its own. Then another man approached us selling fresh coconuts. He cracked one open and provided us straw for us to drink the sweet and refreshing juice. What could be fresher than that?

We also had other fabulous local meals in Bohol but that sea urchin made my trip more exciting and more exotic than I expected it to be.

/// Written by Mayleen Cadiz, The Philippines