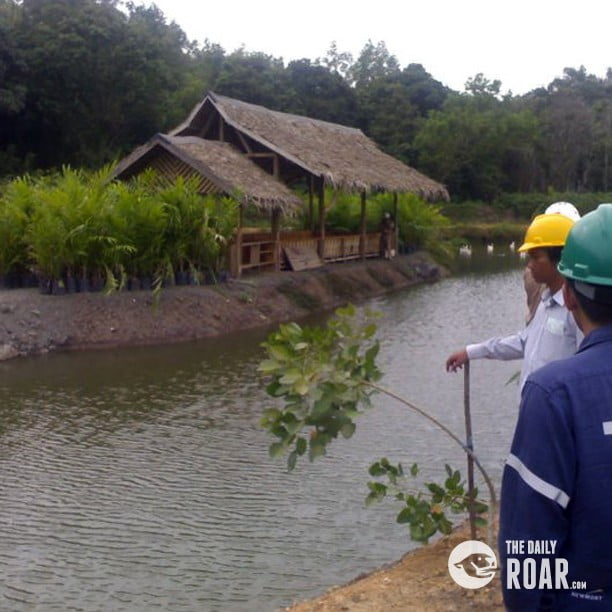 Even though Indonesia is located at the equator, water still become a big problem especially for traditional people whose life depends on the forest as natural water reservoir.
Once a mining company starts its exploitation activities, water problem starts. It is mainly because acid content inside extracted rock. Without performing quality water treatment, this acid content will become another serious trouble, instead of water. The higher the productivity level, the higher acid content will be produced. That is why, as you can see from the picture, every mining company, needs a special place to store this acid. Indonesia itself is another serious problem because, as what I have said before, it is located at the equator which has the highest rainfall throughout the year. The higher the rainfall, the more acid will be stored inside a rock.

Performing quality water and acid treatment is one tough thing that every Indonesia mining company should do, especially when they realize that there is a probability for the water or acid content to flow outside from the mining area to public water reservoir. If there is no quality water treatment done, public water will be ‘infected’ which leads to worse water quality and brings metal toxication.

From the picture at the left side, you can see a water treatment process done by Bukit Asam Mining Company in South Sumatra, Indonesia. It can be considered as a simple water treatment process. All liquid including water and acid content from mining activities will be flown into several pools with different treatment method. From the first pool until the last one where fresh water produced, liquids will be treated differently. First, all metal content will be eliminated, followed by turbidity reduction. After completing the first 2 steps, liquids will be tested for its taste. In order to make a tasteless water which is one important requirement of healthy water, some chemical contents will be put into the water. Next treatment is checking living organism. In order to make a fresh and healthy water, there should be no living organism inside the water, especially viruses and bacterias. When the steps completed, water can be channeled to public water reservoir.