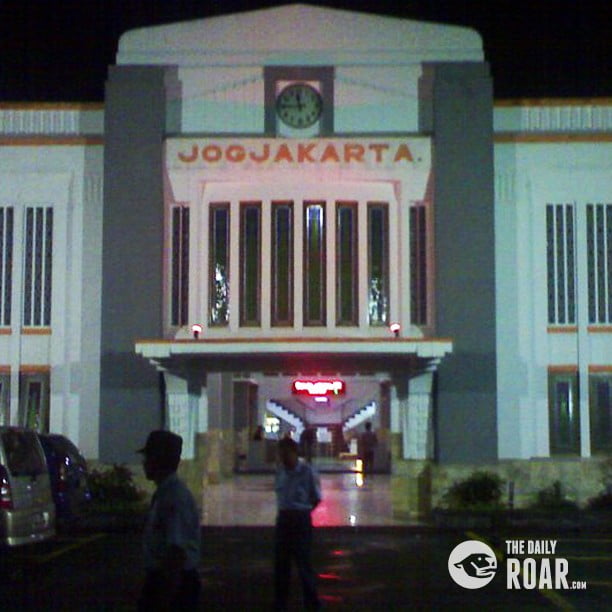 For a long time, people have recognized Yogyakarta as a living monument from colonial period. Among so many colonial building you can find in Yogyakarta, Tugu Train station is one place you should not forget to visit. Built in 1887, It is one of the oldest train station in Indonesia and the only Indonesia train station which has strategic location near downtown, interesting tourism objects, hotels, shopping centers etc. You even need only couple minutes to reach Malioboro, which considered by most people as symbol of Yogya, at the southern side of the station.

At the beginning, in 1887, this station was built as a transit station for trains which were delivering crops from some places in Sumatra, Sulawesi, Java, or Kalimantan. However, one decade later, started from just a little train station, Tugu train station began to serve rail passengers. First track was built to connect Solo and Yogyakarta, but not this special station has at least 6 tracks and serves almost all tracks from and to major cities in Java island with more than 6 departures per day, from economy, business, to executive class.

From the picture, you can see the front door of Tugu station. As you can see, the building has colonial construction pattern. If you ever came to this station, once you get down from your train, you will find huge wooden doors and high ceilings, along with white-painted walls. Even until now, the originality of this building is still preserved.

Even in this train station, you can travel to some locations inside the station. If you visit the western wing, you can see a locomotive repair shop which also becomes a symbol of this train. Among so many train stations in Indonesia, there are only few of them which also work as train repair center, including Tugu train station. At the repair shop, you can enjoy every detail of a locomotive, even tiny parts at the bottom of it using a special ladder. Not far from the shop, you can find an antique black train statue.

Try to walk a bit to the south wing where you will find rail cars repair shop. Even though the only one who can enter the shop are the engineers, you can still see some original tools used by them to fix rail cars. Some of them even originated from colonial period.

Choosing the right time to come to this train station is also very important. If you have enough time, try to come to this station at noon. Between track 6 and 4, you can enjoy sunset at the western side.
After enjoying your time inside the station, you can try to continue your visit in Yogyakarta. There are so many interesting places you can visit at this town, including Sultan palace, bakpia center etc. Don’t forget to bring your cameras to shoot beautiful moment you will experience in this city. Learning Javanese culture is also another thing you should not miss, especially when you visit Sultan palace.