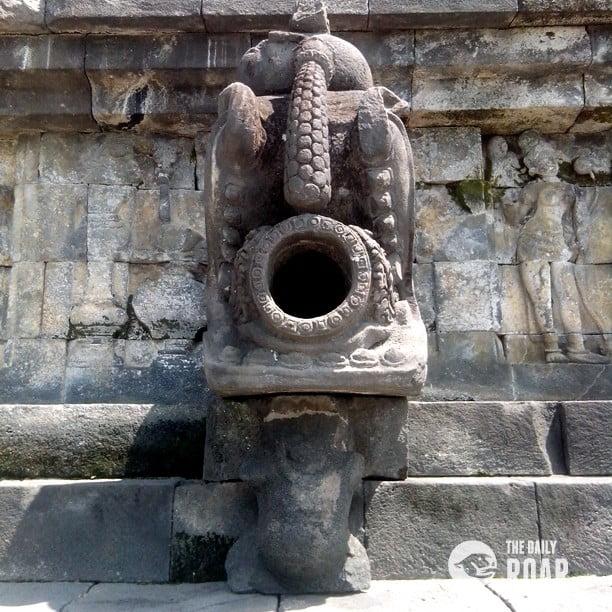 For a long time, water has become a very important part of everyone’s life. Many civilizations have developed and each of them use water for various purposes. At first, people only used water as their drink, but years later, people started to learn that there are other benefits from water, not just as a drink. People began to develop water for other purposes such as irrigation, fuel, technology, religious purposes etc.

Unlike gas and solid, water is very special. At least, there are several considerations for this. First, the natural habit of water itself. It can easily adapt with media where the water is placed. Second, the transparency it has. At least because of these two considerations, people believe that water is a ‘divine’ matter. It reflects the divinity of God himself.

Most religion and beliefs connect water and holiness. One of them is Buddhism. At the left picture, you can see a statue. It is made from mountain stone and you can easily find it around Borobudur temple at Magelang, Central Java, Indonesia. The statue was nicely carved so most people who ever look at it will never realize at once that the main function of the statue is as part of irrigation system around the temple. As you can see, there is a big hole in the middle of the statue. That hole is where the water would flow and together with other similar statue, would create a nice trench surrounding the temple.

Beside adjusting the beauty of the temple, the temple architect also built the trench as a representation of human life in earth. At the same time, the trench when it is filled by water also reflects divine state of heaven where Buddha lives. It completes the beauty of Borobudur temple.

Because of its important function, as you can see at the picture, the statue is not an ordinary one. It was specially designed to meet those purposes. Take a look at the picture carefully and you will soon realize that the design used to carve the statue looks like a guardian one. If you ever come to Borobudur temple, you can find these statues at the front side of the temple because since the first time of this temple construction, these statues are made not only as part of irrigation system around the temple, but also as a reflection of guardians which task is to protect the temple. For people at that time, this temple is not just an ordinary temple. It is a special temple which completes their point of view about heavenly place. For these people, these statues are the protector of the temple, as well as the heaven.