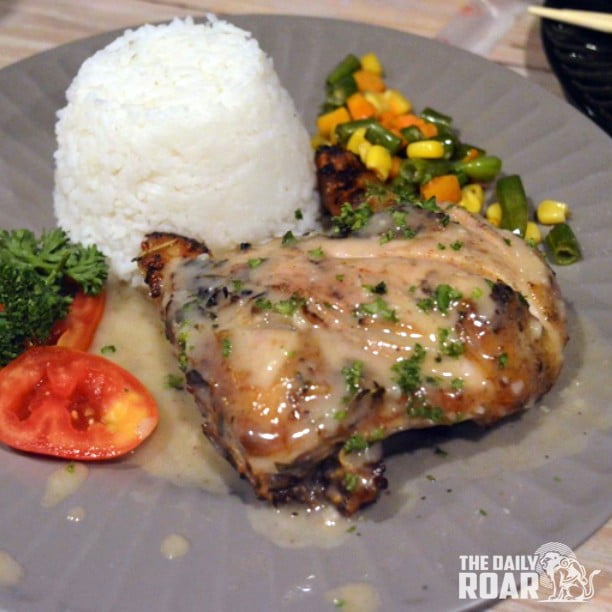 Along the streets of Congressional Avenue is the newly built food park Happy Tables in Quezon City in Manila. Fortunately, we came on a weekday that’s why the diners are fewer; Happy Tables is usually packed on weekends. The only problem though, is the lack of parking spaces. It will be difficult for car owners to find for a parking space because Happy Tables has a limited parking lot; it can only fit around ten cars, more or less. On the other hand, the food park is noticeable because despite being small outside, the name is huge and the list of restaurants available are posted outside the place so people would have an idea what kind of foods are inside.

It has a really good ambiance and is really peaceful too despite the loud music playing. It has a Japanese kind of style and ambiance, maybe because of the lights and lanterns hanging around the food park. On the outside, Happy Tables look small but on the inside, it is surprisingly huge, it even has a second floor. What I like the most is how attentive their waiters are. Upon arriving, the waiter immediately guided us and toured us around the place. He pointed out that we can also eat inside the food park’s café if we want which is the air conditioned part of the place. In the end, we chose to eat on the second floor because it is more relaxing upstairs.

The second floor has a summery vibe because of its design. It is where the food park’s bar The Life Lounge is situated. There is also a band and solo singers serenading the diners on the second floor where you can even suggest a song you want. The second floor also has more privacy than the first floor. 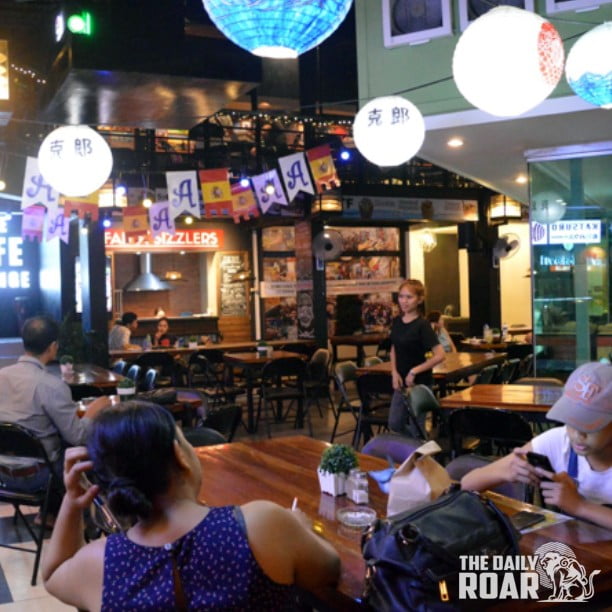 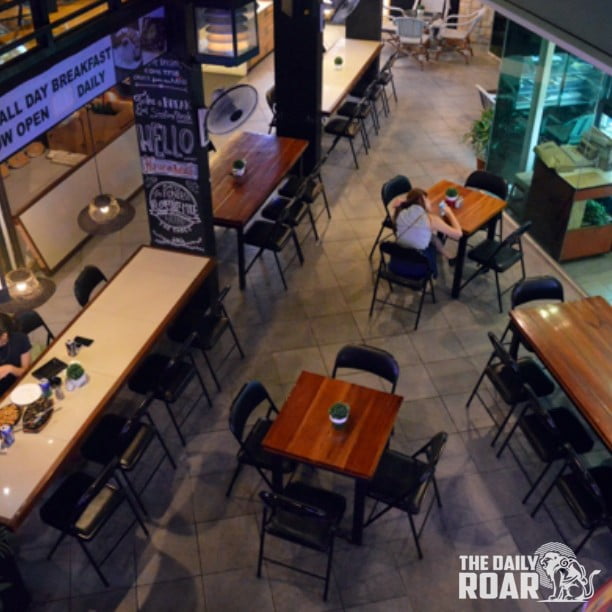 The entrance of Happy Tables

The waiter immediately presented the menus of each restaurant, explaining that there is no need for us to go down to order because he will be the one to bring our orders to our tables. It actually surprised me because I thought we have to go to each stalls to order just like in other food parks but in Happy Tables, the waiters will happily take and bring your orders. The waiters are very attentive, they are always around, ready to get yet another order or even get you utensils.

Happy Tables have a broad list of food stalls for everyone to choose from. There are international cuisines such as Spanish and Japanese foods, there are also Filipino foods. There are pizzas and pastas for the Italian food lovers, there are also steaks and roasts for the steak lovers.

We ordered their shakes for our drinks. The taste is fine; it is not too sweet and for me who is not a big fan of too sweet drinks, it’s perfect. The serving is quite satisfying too; it is big and enough for one person. I like that it is from fresh fruits because fresh fruits are so much better than powdered drinks.

Since I’m in love with Japanese foods, I immediately scanned Katsuro’s menu. I ordered Katsuro’s Las Vegas Rolls, which at six small pieces for P 160.00 is quite pricey for me as a student. The taste is alright; it’s cheesy and quite sweet. The Las Vegas Rolls is their most recommended as it is also the bestseller in Katsuro. There’s nothing really special about, it’s tasty but it’s not really memorable for me. The serving is not enough for me because it’s only six pieces and it’s quite small

It’s my first time to eat Bangus Sisig and let’s say I’m not disappointed. I’m not a big fan of Bangus dishes that’s why I first doubted this dish but I’m wrong. Fab Sizzlers’ Bangus Sisig is really good and it’s very tasty. Its gravy sauce gave it a creamy taste, something I love the most about it. With the price of P 180.00, I can say that it’s worth it because the serving is good for two people.

Paella Valenciana from Amelito’s Spanish Cuisine is seafood paella. It tastes good but the taste can be very overwhelming that we ordered half a rice to mix with it. Even though the serving is for solo, it can actually be shared because it’s quite a huge serving with huge seafood toppings. Though it taste fine and is good for two, I think its price is not worth it. It’s quite expensive for a simple dish.

The Bacon and Mushroom Burger is actually a pizza, not a burger, from Pizza Stop. It literally tastes like a bacon and mushroom burger turned into pizza. It is small but has a thick crust that’s why it’s still satisfying in the stomach. I like how soft the inside of the pizza is and it’s not hard to bite. Although it’s full of cheese, it’s not overwhelming on the taste. It’s quite small but it is worth the price because its thick crust will make you full in a second.

The Quarter Lemon Herb Chicken from Ton Nik Pao is very delicious. It’s my second favourite dish from our order in Happy Tables. It’s so creamy and tasty. The chicken was roasted first but its inside is very soft and tender. Even though it’s only a quarter, it’s a big piece and will definitely make a person full in just one serving. The chicken is so big that we had a hard time consuming all of it. With the price of P185.00, it’s definitely worth it and is much recommended.

Leave the best for last they said so here’s, in my opinion, the best so far in Happy Tables. Since my mom is in love with steaks and ribs, we ordered Ton Nik Pao’s Baby Back Ribs, which at P285.00 is quite pricey in my opinion but it definitely did not disappoint. I can only describe it as “absolute heaven”, it’s that delicious. It has a big serving and is good for two despite it being for solo. Despite its absolute deliciousness, my mom is not successful in consuming all of it, that’s the only reason why I got to taste it. The beef is surprisingly tender and soft despite being roasted, I’m actually surprised at how good it tasted. I’ve eaten similar dishes before but so far, nothing can be compared at how tasty and delicious Ton Nik Pao’s version is. It has the perfect balance of sweetness and saltiness. Even though it’s quite pricey for a single meal, I’d still say that it’s my most recommended dish to try at Happy Tables. It will be totally worth it.

My food trip experience at Happy Tables is so worth it. First of all, the dishes are affordable, some might be more expensive but it’s totally worth it. Secondly, the foods are all delicious and the serving is very satisfying. Thirdly, their service is really good; the staffs are all accommodating and attentive. Fourthly, it’s a perfect hang-out place for everyone; students, families, friends, it’s for everyone. Fifthly, It’s just pure, total, absolute awesomeness and everyone should try visiting it.