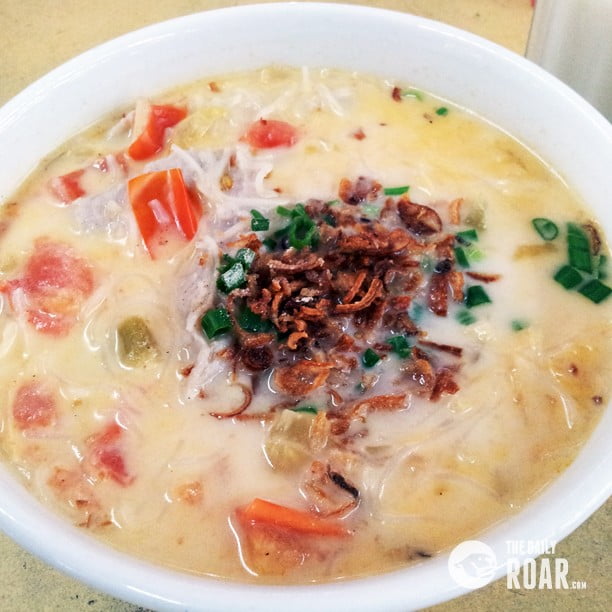 Locating a bowl of fish head noodles aren’t difficult as you can easily spot them in most Chinese coffee-shops, stalls or even air-conditioned restaurants. Typically, fish head noodles are mostly cost between RM8.00 – RM10.00 per bowl. It might sound expensive if to compare with other regular noodles (such as mee goreng or fish ball noodle soup) but it’s actually worth the price since it often comes in a big bowl with lots of ingredients inside.

When you order fish head noodles, you have two choices of either “fish head” or “fish paste” (if you are the type who are lazy enough to remove the bones out of the fish). If you opted for fish head type, you will find the fish head is fried until golden brown and crispy in taste. Any true fish head noodles lover will tell you that opting for fish head is a much more complete experience than fish paste. This is because fish paste can sometimes taste bland or even tastes like processed food bought from supermarket. So depending on the eatery place, fish paste is mostly tastes better if it’s freshly made.

A bowl of fish head noodles are usually served together with diced tomatoes, fried shallots, preserved vegetables and spring onions. As for the noodles, there are usually served with vermicelli which often describes as thin rice noodles or commonly known by the local Chinese as bihun. The broth itself is rich and milky with a hint of aromatic wine, ginger and pepper. Drinking the broth alone can be addictive (and I mean it in a good way) especially if the evaporated milk is opted from Carnation brand (which is widely believed as the most popular brand used for fish head noodles).

So, if you are around Klang Valley area and you are fancy for a nice bowl of fish head noodles, you can check out at either Woo Pin Fish Head Noodles located at Jalan 1/109F, Taman Danau Desa or Win Soon Café at various outlets.