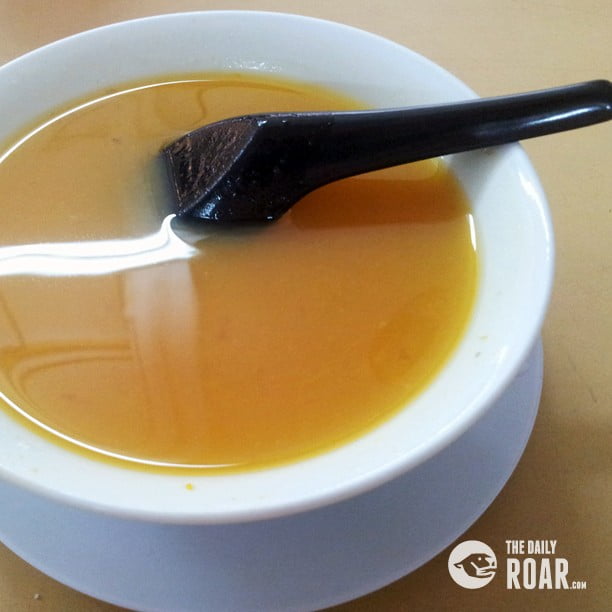 Mention the word “pumpkin”; the first thing that immediately comes to mind is “Halloween”. Jack O’ Lantern aside, pumpkin is actually packed with goodness. Among them is vitamin A, which is essential for eye vision. Pumpkin is also rich in fiber which can aid weight loss. There’s more, as pumpkin contains magnesium, potassium, iron and lots of minerals. In short, adding pumpkin to your diet is good for health. While you can normally find pumpkin dish in most mixed-rice stall where it is stir-fried, you can find other variation of pumpkin dish in the form of pumpkin barley dessert. This is especially beneficial for those who hate the taste of eating a pumpkin.

Unlike the more common Chinese dessert or better known as “tong sui” (which is literally translated in English as “sweet soup”) such as red bean or mung bean, pumpkin barley dessert isn’t really easy to find. However, I’m lucky enough to spot this sweet and healthy dessert at Kedai Makanan dan Minuman PMK, which is located at the tiny street of Jalan Kancil, off Jalan Pudu, Kuala Lumpur. It is a Chinese shop which sells many kinds of dessert (which can be varied, depending on which days you come). The pumpkin barley dessert that I get to savor there only cost me a reasonable RM2.00 per bowl. First of all, the pumpkin barley dessert isn’t as watery as most restaurant or stall that served such Chinese dessert. The pumpkin puree is deliciously sweet and soft to the taste bud. Upon the first spoonful of that dessert, it’s almost tastes like sweet potato dessert. Inside the orangey pumpkin dessert, there is added pearl barley as well as sago and sweet corn. The only gripe about this pumpkin barley dessert is the lack of pumpkin bits for me to chew on. But that’s a minor complaint anyway.
For what it’s worth, pumpkin barley dessert is no doubt one of the nutritious Chinese desserts you’ve ever come across. In fact, the barley alone is known for its cooling and soothing properties, as well as a popular remedy for cough and fever. Now that’s the double benefits of combining pumpkin and barley together.