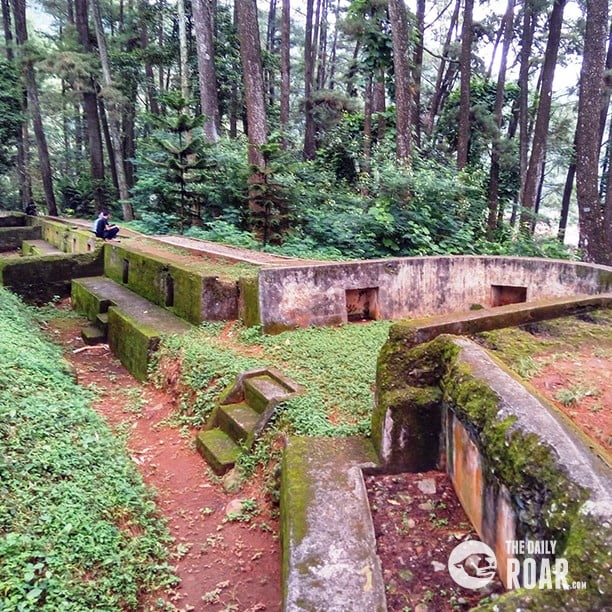 Sumedang might not be a popular place among tourist but however, this regency is still trying to get attention from people outside by developing tourism spot they have. This is also my first time to go to Sumedang. Then I decided to visit Gunung Koentji (new Indonesian spelling would be Gunung Kunci) which is located not far from the government building area in Sumedang. While it also only takes 5 minutes from Alun-alun Sumedang. I could see even before I walked through the main gate that this place still saves some peacefulness and quietude in surrounding.

When arriving at Gunung Kunci, Sumedang

The entrance fee is really cheap, only IDR 3,000. There are some level of stairs I have to walk through until I could find a good seat for taking a rest a little bit. It was really tranquil being there. Just sitting and wondering if there was a perch echoing some birds singing something perhaps.

The Dutch in Gunung Kunci, Sumedang

Then I tried to walk slowly and found the gate of the fortress which being the power of attraction why I was there. It is the fortress defense made by Netherlands during World War I, 1914-1917. Caves and bunkers are here built to protect Dutch military from attack. They also put up a cannon facing straightly into the center of government.  The fortress defense deliberately built over the hill so that Dutch could easily monitor all the movements from above. I know it was quiet scary to go around the bunker just by myself but then when I arrived in front of the gate which was written” G.Koentji”, three teen girls called me and asked me to join them went inside the cave. It was really dark I’m not lying. I couldn’t see anything around just totally darksome so I had to turn on flashlight from my phone. Maybe we were too afraid to explore the whole rooms and spots so we just passed it so quick, not even a minute. Actually we could also check the rooms we saw on our right and left and it was leading us maybe to somewhere darker inside but I didn’t think I should go there without any guide, it might be bad for any reason. I remembered that it once ever became a place for Uji Nyali or in English perhaps it could be like a gut’s test of kinda supernatural things or something like that. Before we went out, we gotta pass through some stairs and finally found some disorganized stones. This place might not have any guide so I don’t know what happened to the messed up think behind the cave. Maybe it is something remain related to the destruction.

The fortress are really well built even after it’s stacked by hundreds of pine trees and mound of soil. But then it was finally destroyed right before Dutch left Sumedang. A version says it was bombed by Japan while the other says even done by Dutch itself. Some debris still there just so we know that Sumedang can’t be just left behind.  It has been a part during fight history.