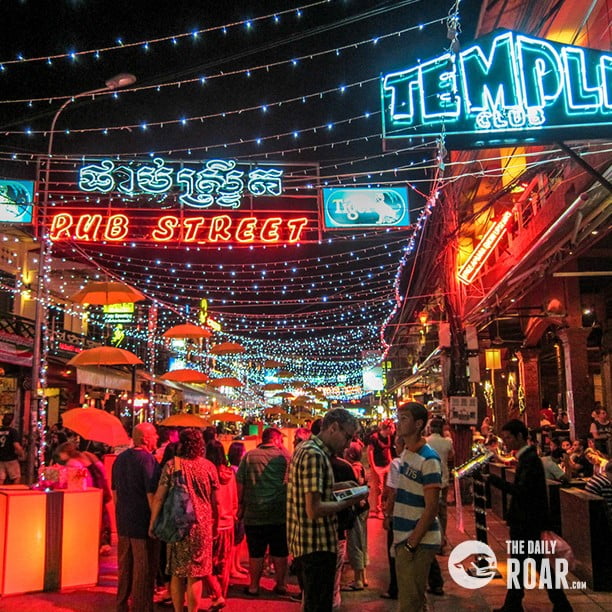 Pub Street a street filled with bars and restaurants

Lights are off and roads clear out in Siem Reap, Cambodia, pretty early even on the weekends except for one of their most well known spots – Pub Street. The city relies heavily on tourism to supply their people with jobs, so much that they have incorporated US Dollars as part of their local currency (Cambodian Riel is treated as “cents” while the main currency is USD). So, after an entire day of exploring the streets for bargain deals on tuktuks and climbing the temples in the outskirts of the city, you might be craving for cold booze and heavy, fulfilling food. If that’s the case then Pub Street is the only place for you.

Pub Street is barely five hundred meters long, surrounded by bars and restaurants and the occasional stalls selling unique merchandise (we’ll get to that later). There are a bunch of side streets as well which lead to quieter yet, in a sense, cooler bars if you’re feeling a bit hipster-y. Each establishment has at least two floors and believe me, you won’t run out of things to order. They have American, Chinese, English, Indian, Japanese, and of course, Cambodian food. Craving for burgers? Katsudon? Sausages? Curry? These guys have got you covered.

Of course, when you hear or read the word “Pub”, you think booze, right? Well, they have tons of that too. Arguably their most popular local beer, a tall glass of Angkor Beer will set you back a measly $0.50. No, that is not a typo. Fifty cents or two thousand Cambodian Riels can get you a cold beer. That can be your pregame or if you want to go for other beers, they have a few American brands along with the more popular Asian ones like San Miguel and Tiger. If you wanna go hard, they have cocktails and mixes I’ve never heard of. We ordered a cocktail in a small pale with straws so my friends and I had to lean in to drink. They have this cool concept also of shoving a glass of beer into a glass of cocktail with lots of ice.

After glasses of beer and drinking games, you might want to initiate the adventure that you and your friends will talk about for months. Be the first to dare a friend to eat something unheard of, something you only see on tv. You have a lot to choose from: grasshoppers, scorpions, snakes, spiders and worms (or maggots, I didn’t really want to look so closely). My best friend and girlfriend were crazy enough to try spiders. It isn’t your typical home spider that you can just squash with a shoe. I’m talking about half my hand, crunchy and overly fried, perhaps to kill off any harmful substances. I tried a leg and I wish I could say it tasted like chicken, but it didn’t. If you aren’t feeling as badass as we were, you can try the crocodile burger. I just hope they breed them separately, can’t imagine what they feed on. 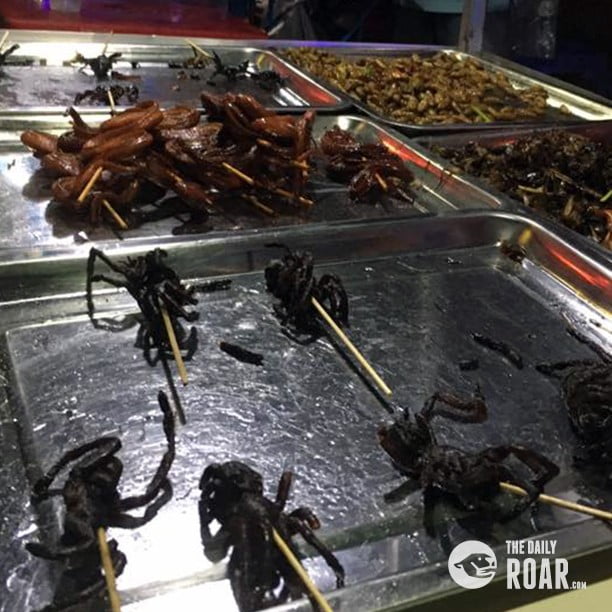 That being said, Pub Street is the place to be late at night (and early morning if you were too drunk to walk back to your hotel). Everyone is nice. Theft isn’t an issue in this city. And oh, the bathrooms are clean and they all have bidets, just in case you’ve had too much to drink. Cheers!