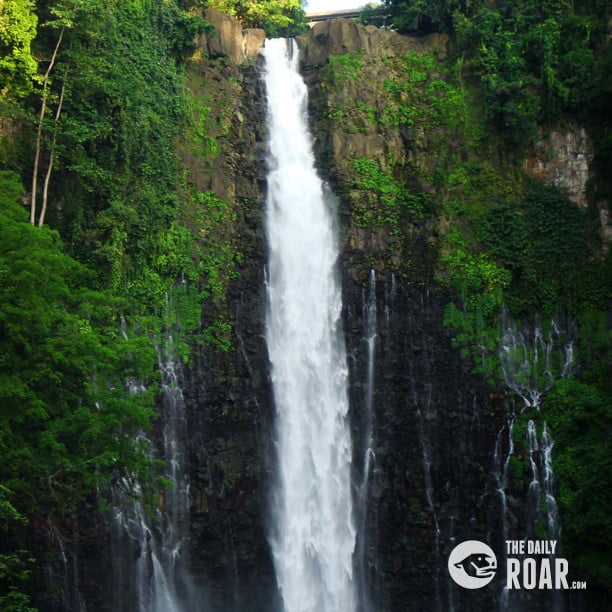 With several falls found in Iligan city, perhaps the most famous among them is Maria Cristina Falls. It is also the most legendary, as its history is always told among legends and folk tales. Maria Cristina falls, is also called the ‘twin falls’ as its flowing water from up above is divided by the rocks in the center. According to many visitors, the falls is magical. It seems to know how beautiful she is that it seems intimidating. Well, with a view so fascinating, it is no wonder people would say things like these about it.

Maria Cristina is actually located in the Agus River found in Mindanao, specifically in Iligan city. It is famous for its natural beauty. It stands 320 feet tall and has 98 meters high waterfall.

The falls is the primary source of electricity in the city and operates almost 70 percent in the whole island of Mindanao through a hydroelectric plant that operates in the Agus River.
Why visit Maria Cristina? Well, visiting there is actually not a hassle at all. The entrance fee to Maria Cristina Falls is less than a hundred peso which lets the visitor ride a shuttle-like elevator in order to get to the viewing place. The security is also tight however, picture-taking is definitely allowed. But, one cannot get close to the falls, not like the falls in Tinago, where one can really have a swim and get close to the falls, since the current of the falling water of Maria Cristina is really strong. Everybody who has gone to see the falls would say that it is so amazing and its beauty is captivating. What adds to the view and tour around the plant are the zoo and park near to it called the Botanical and Zoological Gardens. Moreover, what makes whole place more enchanted is the calm, peaceful virgin forest that surrounds the falls. In the meantime, the falls is bound to be enhanced more to increase and to preserve its beauty and to attract more and more visitors.

The falls is known in the entire Philippines but having the chance to witness it is entirely a different thing. It is like no other waterfall. Indeed, it is the greatest landmark of the city, and perhaps, the whole Northern Mindanao. In addition to that, it is not only the city’s pride but is also a pride of the whole country as well. Among all of the falls found in the country, it is one of the most splendid. It is not only legendary, it also helped the city rise economically that’s why it is also fondly called as the city’s “Mother of Industry” and “Fountainhead of Progress” as it has contributed a great deal to the city’s industry.
Come and visit the majestic falls and be enchanted. Have a break and take a look and listen at the cascades of the falling water. Learn much of the city’s history and how it came to be with the help of Maria Cristina Falls.