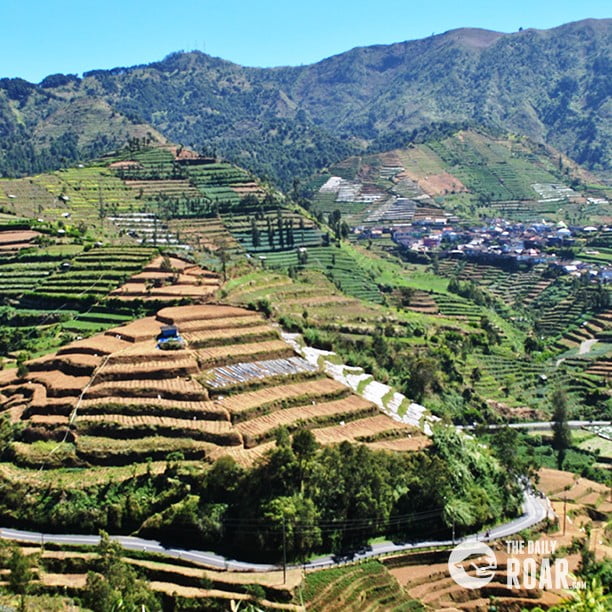 Dieng Plateau lies above 2093msl around 145 KM northwest of Special District, Yogyakarta, Central Java Indonesia and it can be reached in around 3 to 3.5 hours by driving private car, and up to 5 hours by public transport from Yogyakarta. Dieng Plateau is a plateau with volcanic activity below the surface. Actually this is a caldera with the mountains surrounding the edges. Dieng is a huge active volcano area which erupted hundreds years ago. The peak itself is ‘gone’ cause of the huge eruption and created a plateau that left so many craters as a result. Sikidang, Candradimuka, Sikendang (potentially with toxic gasses), Sileri,Siglagah, Sinila(potentially with toxic gasses), and Timbang crater (potentially toxic gasses).

Dieng also has many Volcanic lakes such as Telaga Cebong, Merdada, Pengilon, Dringo, Nila and Telaga Warna . Telaga means small lake. One of them is very famous called “Telaga Warna” or Color Lake. Telaga Warna by the old myths of local people is one of the bathing places of Dewi Nawang (one out of 7 angels). Telaga Warna or Color Lake is created due to the sulfur and the colors will change to blue, green, even yellowish according to the weather. Sometimes, if you are lucky you can also see a reddish color. Telaga Merdada is the biggest lake in Dieng Plateau area. Telaga Merdada is never dry or subsided and the water is used for watering the agriculture fields, and as irrigation.

Dieng, somehow comes from a combination of 2 words in Kawi Language ( Language that used in the ancient kingdom of Hindu-Buddha era.) “DI” means place, and “HYANG” means God. So Dieng means Heaven or Dwelling place of the gods.

Dieng Plateu is a very fertile land. Telaga Warna itself is surrounded by a vegetables farm. And farming is the local people’s livelihood. You will see the hills full of green onions or potato, cabbage, and many other vegetables. The road access is good which makes it easy to distribute the vegetables outside of Dieng. Fresh air makes this place very memorable. The temperature here are normally up to 18 degree Celsius during day time and down to 8 degree during night time and from July – August down to 0 degree Celsius at night time. At this temperature there will be a frost which is called “bun upas” by local people or dew poison causing damage to the agricultural crops. 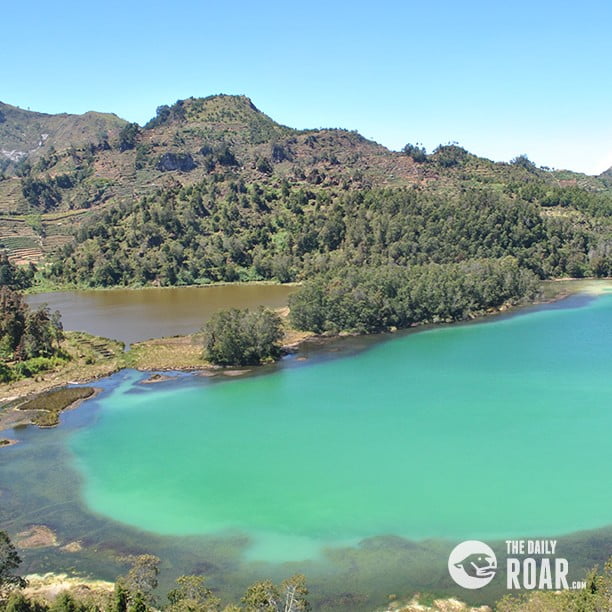 Sikidang crater is 15-20 minutes away from Telaga Warna. Hindu’s people around Indonesia especially Bali have a ceremony around this crater every 100 years and pray for the safety of the local people. 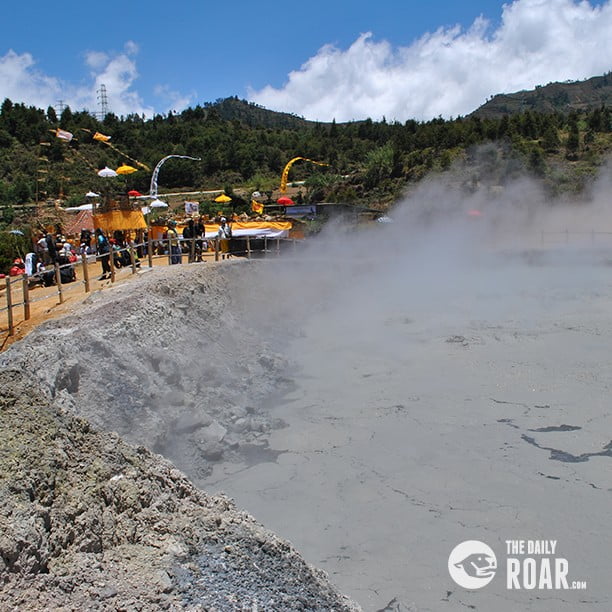 Dieng, just like any other place in Central Java, also has many temples. For example the Borobudur temple in Magelang, Prambanan temple in Jogya, Mendut temple in Mungkid around 3Km east of Borobudur temple, and Arjuna temple in Dieng. Dieng also has many temples that where built in the 8th century such as: Gatot Kaca temple, Bima Temple, Dwarawati temple , Arjuna temple itself. Arjuna temple is the most famous temple to be found in Dieng. This temple lies in the center area of the vegetable farm. As in most temples in Java the Arjuna temple has a building style called “Shiva”. Inside the temple they found an inscription with the number 731 Saka or equal to 809 AD making it likely that the Arjuna Temple derived from the VIII-IX century. But there is another possibility that the temple is much older than the VIII century. Recently in 2013 another temple has been found at the Dieng hills.

Mount Prau can be reached in 3 hours from the village. The best time to go is around 2 or 3 AM to see the sunrise and come down after that. Or if you love camping, the best time to go is before sunset. You can almost see all mountain tops in Central java from this level, like mount Sumbing, mount Sindoro, mount SLamet, Merapi, Merbabu and many more. Mount Prau is a non active volcano. Vegetations here at the mountain are covered by grass, weeds and wild flowers. Most of these flowers are the Chrysanthemum flowers. 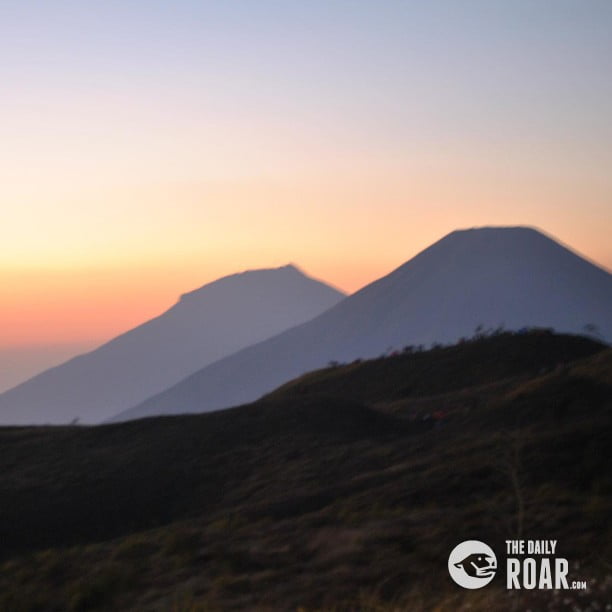 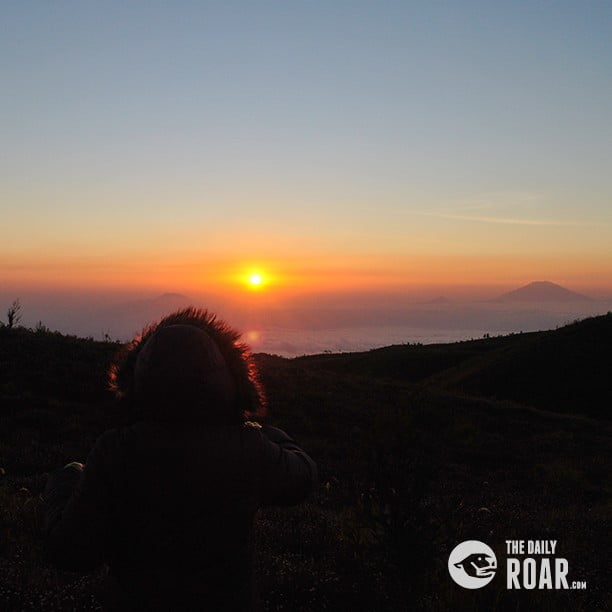 At the top of Prau you will feel that you are on top of the clouds. At this level, after 8 AM all you can see are the cloud covering the villages beneath. Basically Dieng is famous with the words: A Place beyond the clouds, or a heaven where gods are dwelling.

Note:If you don’t have a private car rental car are quite expensive, the other way you can go is by travel bus. It takes you from Jogyakarta straight to Wonosobo and it will cost you around Rp 90.000/person (Oct 2013) which will probably will increase due to issues like the price of oil. It takes 3.5 hours from Jogya to Wonosobo. And from Wonosobo to Dieng, get the public transport for another 45 minutes to 1 hour. The latest transport will leave at 6PM. There are many guest houses or small hotels around this place but during peak season (Jun-Jul) you need to reserve for an accommodation. Guide fee Rp. 150.000 – 200.000/day.