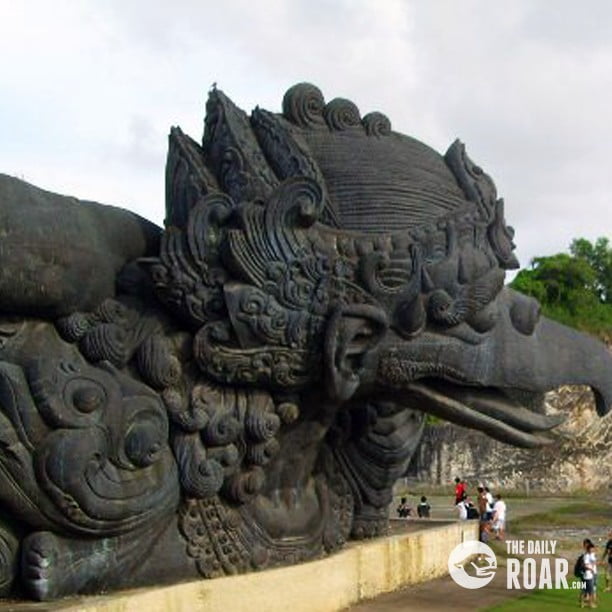 Among so many countries in this world, there are only 13 of them which choose bird as their national symbol, including Indonesia. However, most people believe that garuda which has been chosen as Indonesia national symbol is not actually a real bird. It is actually a bird which came from myth, even though there are some similarities from this bird with eagle or other species.

The only source where we can find proof about this bird existence is from Mahabharata book, at the first chapter: Adiparwa. At this section, we know that garuda is son of a priest whose name is Begawan Kasyapa. He had two wives: Sang Winata and Sang Kadru. Even after a long time, they still did not have a child, so Kasyapa gave 1000 eggs to Kadru while to another one he gave only 2. Kadru’s eggs hatched into 1000 mighty snakes before Winata’s. Being so ashamed, Winata decided to break one of her eggs. From the egg, she got a little bird which body is not perfect yet, without leg. Later she named it as Anaruh. Looking at this, Winata finally decided to keep her remaining egg.

One day, Winata placed a bet with Kadru, but she lost the best because Kadru’s fraudulence which forced Winata as her slave and her 1000 snakes. At this moment, Winata’s last egg finally hatched into Garuda who has received mighty power from gods. In order to help his mother, Kadru asked Garuda to take Amerta, living water which belongs to the gods. This water is strictly guided by gods and surrounded by flames. Before taking the water, his mother adviced him to spill out his victim if he feels his neck so hot because it means he had already eaten Brahmana, a person to whom he should give great respect, just like his father.

Finally, Garuda succeeded in bringing the water, then he brought it to Kadru to save his mother. Arriving at Kadru’s place, all snakes there were very happy to see the living water which will give them another power and eternal life, so they decided to free Winata, but Garuda never lost his idea. He flicked his wings to make the snakes dirty so they should clean themselves first at the river. Garuda finally left the place, bringing both his mother and Amerta water. While flying back to his house, he met Wishnu who asked for the Amerta water to be given back to gods. As replacement, he asked garuda to become his mounts.

From the story, we know that Garuda was chosen as national symbol of Indonesia because of his spirit. He has willingness to sacrifice in order to free his mother. Our founding father hopes that our nation also has this spirit to serve this country and sacrifice if it needs to, especially when there is a threat to our independence. Garuda is also a person who respect his father, represented with sky and his mother who is represented by land.