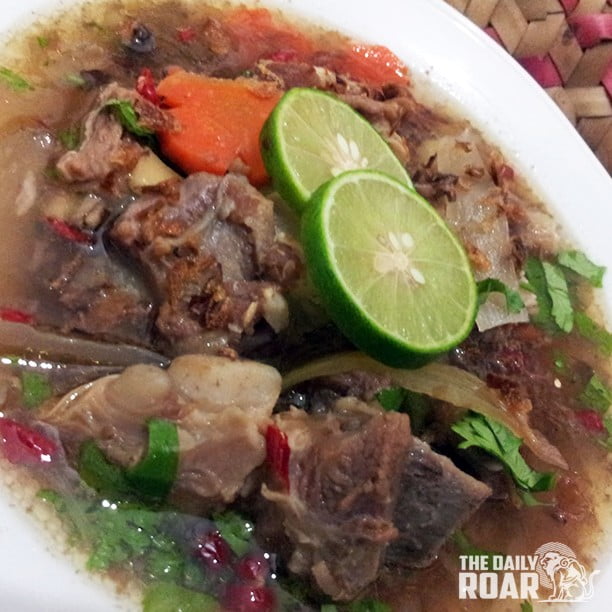 Beef Soup. While technically true, that is an awfully plain, simple, and downright crude way to describe the masterpiece I have before me. It is not just any beef soup. This bowl of wonder is a tribute to the culinary melting pot that is Malaysia, and is a symbol of what is constantly good in the world – food.

A short introduction on this popular dish that originates from Malaysia – this beef soup is known in Malay as Sup Tulang. This translates directly to bone soup. Unsurprisingly, the creation of this soup involves the cooking of bones, which is what really gives it the distinct flavour. While the soup can also be made with chicken, or even oxtail, I am of the opinion that beef is far more suited to this taste. The Sup Tulang my mom cooks often involves great big cubes of beef ribs, that if cooked correctly, should split at the slightest touch. It also involves the usage of multiple different herbs and spices in small amounts, such as :

I think this is really what makes the dish special – the different herbs and spices, fusing into one with the beef flavour that exerts itself from the bones. Lime, fried shallots, chilli, and chopped spring onions are also added. The lime is a special touch that is typical of my home state, Kelantan, located in the northern part of Malaysia. Usually, these ingredients are all meshed together, and boiled for hours. For an easier time, however, my mom has taken to using a pressure cooker, which works just as well. The soup still holds all the flavours, and the beef is as tender as can be.

This dish can be enjoyed in one of two ways – as a shared dish among friends and family to be eaten with rice, or as an individual dish, cooked together with any type of noodle e.g. vermicelli or glass noodles. I personally enjoy it on noodle form. When eaten with other dishes, some of the taste of the beef soup is easily lost. In fact, I have rarely ever encountered Sup Tulang in my forays around Malaysia. Maybe I’ve been looking around the wrong places. Maybe it’s gradually becoming a lost food. Or maybe it’s just food that is meant for home.

Sup Tulang is a true Malaysian dish, that is perfect for almost any setting. Should a restaurant serving such food be lacking, it is not the hardest dish for one to cook. The herbs above can be found in local supermarkets, as can the rest of the ingredients. The only cooking involved is the boiling of the beef together with the soup. In any case, Sup Tulang is not something you should miss out on.