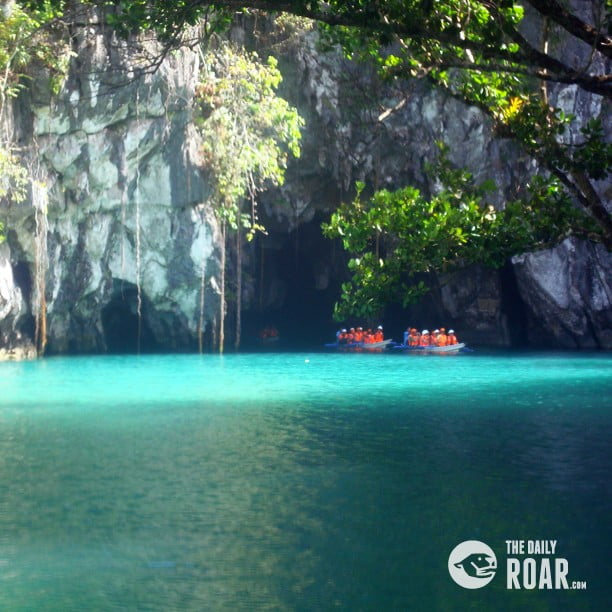 It has gained much popularity among tourists and locals since it has been chosen as one of the New 7 Wonders of Nature in 2012. It is now a protected site. Now, that makes us Filipinos real proud! The Philippines is famous for its gorgeous white sandy beaches, but the Underground River offers something new to tourists and locals alike. Its 8.2 km long and flows directly to the sea!


To go to Palawan, we booked a flight through Cebu Pacific from Manila (around 1.5 hrs) and stayed at a small cozy resort called Palo Alto, just in the middle of the city. Through the hotel, we were able to get an Underground River tour for around PHP 1,500. This includes the van, fees, lunch, and the Underground River tour. It’s not that easy to find an open seat so it’s best if you book the tour well in advance. There are several tour companies that can provide this service. Walk-ins are discouraged because you will need a permit from the Tourist Information Center before you can enter the Underground River. The tour company you hire will take of this for you. No hassle.

Early the next day, a van picked us up for the 2 hr ride through the mountain region on the way to Sabang Port. The scenery along the way is just beautiful, but be warned, it’s a zigzag of roads, sometimes unpaved and the van drivers are just maniacs! Maybe they’ve been driving this route for such a long time that they can do it in their sleep… but still, hang on to your seats! They will literally take you for a ride.

I breathed a sigh of relief when we reached the town of Sabang. This is the jump-off point where you will take a 15 minute boat ride to the beach near the underground river. The waiting is longer than the actual boat ride, and most of the time there’s a long line of visitors. But it’s windy and there are shops and eateries that you can browse to pass the time.
When you reach the beach, a short hike through the jungle will take you to the Underground River. Finally!! We get to see what all the wonder was about. The water everywhere was just clear and green and so inviting! But we didn’t go there to swim. So, we hired a paddle boat along with some people from our tour company, and we were given a life vest and a hard hat, and we were ready!

As we entered the cave, suddenly, you forget about everything! It’s just you and this ancient place. You get transported to a different world in there. It was very dark, quiet and all you can hear is the voice of the boatman, spinning his funny stories and descriptions (in English) of the stone and stalactite formations inside. Make sure your camera is good with night shots or else bring a strong LED light. The cave was eerie and you can just hear the paddles lapping at the water.. and sometimes, the flapping of bats wings. Oh yes, there were a lot of small bats in there! They’re harmless though, so don’t worry.

When we reached a certain point, we turned back. The boatman said we couldn’t go any further. I was a little relieved at that, I must tell you.

After that we took more pictures and headed back to Sabang, where the tour company had lunch prepared for us in one of the resorts.

The Underground River of Palawan is definitely something that you should include in your bucket list. It is worthy of being named one of the New 7 Wonders of the World… and it’s here, in the beautiful land of the Philippines.