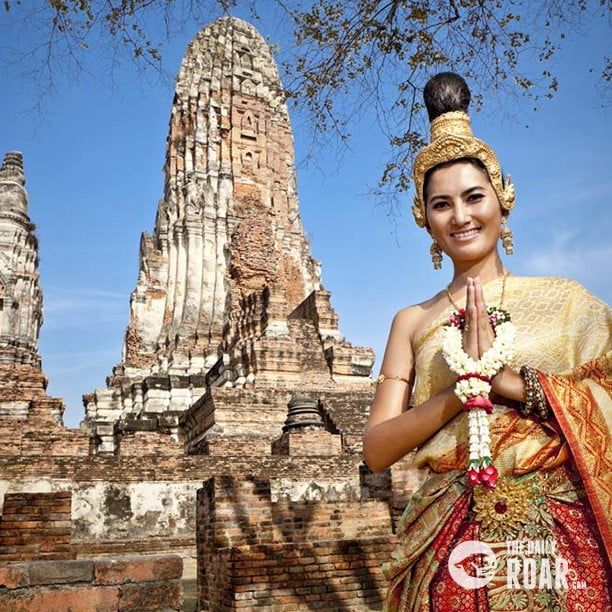 The most important customs in Thailand

They say when in Rome do as the Romans do, well the same holds true when in Thailand. There are many conflicting guidelines written on the internet when it comes to behavior and Do’s and Don’ts. This can at times be concerning and overwhelming when all you want is the truth on how to behave like a local, so read on to discover how it’s really done.

Feet – In Thai culture, the feet are seen as the spiritually lowest part of the human body and the rules are simple no matter what your age or nationality is. Never point with your foot, Keep the soles of your feet facing down and remove your shoes when entering a private home or building. To show the soles of your feet is seen as the utmost of disrespect by all Thai’s and could land you in hot water should you do so.

Emotions –A majority of Thai people are welcoming, warm and like to keep their cool when it comes to emotions. Raising your voice and shouting is seen as very rude and could result in finding yourself in trouble with the locals. No matter the situation, smile, keep your voice gentle and don’t become irate. It can be frustrating for both parties at times due to misunderstandings in communication, but as the Thais say ‘Jai yen yen’ or keep a cool heart to have a trouble free trip.

Addressing people – In Thailand the way you address someone depends on several factors. Anyone who is older than you or of a higher social standing should be referred to as ‘Pee’ and anyone younger should be referred to as ‘Nong’. As an example, a male wanting to get the attention of a waiter would say ‘Nong krub’ whilst the same male wanting to talk to a police officer should address him as ‘Pee Krub’ whilst these rules are not expected of tourists, it goes a long way in helping show your respect to the local people and you will be viewed favorably.

Public displays of affection – For the reputation that Thailand has the world over, you may be surprised to learn that Thai people are very discreet and do not appreciate public displays of affection. In fact, you will never even see a couple kiss on Thai TV. Holding hands is fine and In areas like metropolitan Bangkok, a quick kiss won’t be frowned upon. However, French kissing, groping and making out will garner you a bad reputation and you will be looked upon as someone of bad character.

Lèse–majesté – Thailand is a country to is governed by a law of Lèse-majesté and the very worst thing you can do in Thailand is criticizing or talking badly about the Royal family or government. If you do so you run the risk of being imprisoned or be reprimanded by the local Thai citizens. Thai people are fiercely patriotic, and when it comes to their leaders, insulting them truly is the worst thing you can do.

Watch your words – Whilst you may find it funny to learn curse words in another language, in Thailand you will find yourself in trouble if you utter any words in Thai. The only time it is acceptable is when you are with close friends, and even then exercise caution. Thais tend not to curse unless they are angry or having an argument and words are viewed as showing your intellect and should be done so to show good social and moral standing.

Money matters – There a Three simple rules when it comes to money in Thailand. If you drop it, NEVER try to step on it to catch it. Remember the foot is seen as the most insulting part of the body and you would be placing it on the head of a monarch which is an actual crime here. When paying for things, always hand the money to the person directly and never throw it or drop it on the counter as this would be construed as being insulting. Lastly, never discuss money with people unless it’s with close friends or family. To show off wealth is seen as common and uncouth and is not appreciated by Thai citizens.

Socializing – Thais love nothing more than to go out with friends to eat, drink and dance the night away. When you are going out for the evening remember not to drink too much and try to remain as polite as possible. Thais do not like drunken people they do not know entering their personal space, so do not approach people unless invited to do so. Normally, Thai people will offer a drink to tourists at the table next to them and it is perfectly acceptable to accept. It is also seen as good manners to return the favor, but remember to be polite when doing so.

Condiments – In Europe and America it is commonplace to cover your food with Ketchup, Mayonaise, and mustard, but to do so in Thailand is very insulting and shows a total lack of respect for your host countries cuisine. Of course, put a dash of sauce to the side of your dish and then dip your food into it and do not liberally drizzle sauce all over your food. The food in Thailand is delicious and overusing sauces and condiments look as though you are trying to mask the flavor.

Eating – When eating in Thailand it is customary to first wash your hands. There is a common myth about placing a fork in your mouth to be seen as rude. This is not true. A fork and spoon are used to eat most foods, and a knife for steaks and salads. Chopsticks are not usually used for food other than noodles and it is perfectly acceptable to eat sticky rice with your hands.

Dress codes – Thailand is quite conservative when it comes to dress codes. It is not acceptable to walk around in a bikini or to be shirtless anywhere other than at the pool or the beach and when visiting temples remember to cover your chest, arms, and legs. It is not common knowledge, but to leave your home without any underwear on under your clothes is actually illegal, so if you like going commando do so with care as you could end up in trouble if caught doing so.

Make a difference when your in Thailand

These simple ways of conducting yourself in Thailand really do make all the difference. Remember that you are a guest and that you should treat people as you wish to be treated. Thailand truly is an amazing country awash with culture, tradition and welcoming citizens. As a last tip, learning some of the language goes a long way in helping make your experience all that much more enjoyable. Thais will look upon you favorably if you can speak a few words with them, even if you pronounce them wrong they appreciate the effort you have made.

The easiest way to look at it is this. If a Thai person visited your country and only spoke Thai to you, what would you do?